Semi-closed greenhouses are no longer only for areas with a temperate climate. For more extreme climates there are also solutions - creative solutions.

Three years ago in Japan, greenhouse builder KUBO built their first Ultra-Clima greenhouse with a night cooling system for a rose cultivation company. This example was soon followed twice in South Korea. These countries have to deal with too humid and too warm nights to be able to grow well traditionally or with a ‘normal’ semi-closed system. And they have a subtropical climate. 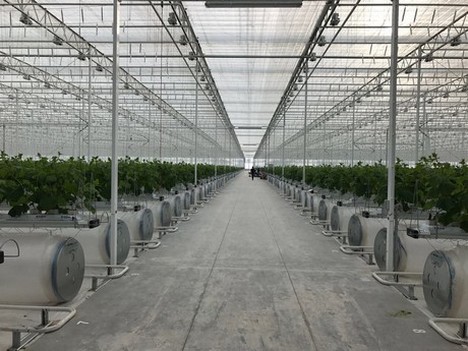 Market demand from this extreme climate area requires a reverse approach to greenhouse climate control. Where in the northern hemisphere the summer is traditionally extended by starting to heat the greenhouse, in these areas the greenhouse must be cooled in the summer during the night.

So the Dutch greenhouse builder from Monster developed a night cooling system. During the night, the climate around the plant is reduced to between 16-18 degrees Celsius. The screens are closed as soon as the sun sets and the air is 100% recycled and the cooling systems are switched on.

Stress-free plant
During the day it is important to keep the plant stress-free. Because of the air flow, which is part of the Ultra-Clima greenhouse system, the plant can continue to evaporate well despite higher temperatures. By subsequently lowering the greenhouse temperature during the night, the average day temperature can be reduced considerably and during these previously difficult cultivation periods it is still possible to cultivate well.