Nosema maddoxi is an entomopathogen infecting Halyomorpha halys in the US

In 2017, Nosema maddoxi (Microsporidia: Nosematidae) was described as a pathogen of the brown marmorated stink bug, Halyomorpha halys (Hemiptera: Pentatomidae). 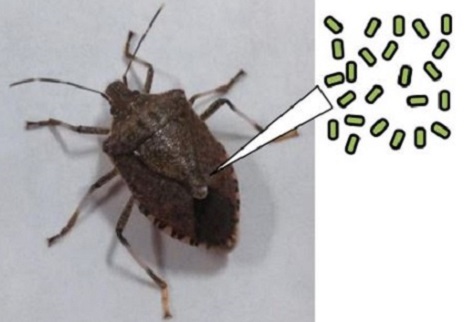 "Previous results indicate that N. maddoxi infection can negatively impact the lifespan of adult females, female fecundity, egg viability, and nymphal survival, which we hypothesize would negatively impact H. halys population densities" the entomologists at Cornell University refer. Few days ago, the same scientists have published on scientific journal Biological Control a new study focused on the phenology, distribution, and prevalence of N. maddoxi infections in H. halys populations in the United States .

Collections of H. halys from three sites in 2018 were evaluated for the seasonality of N. maddoxi infections. Prevalence of infection in spring, after H. halys adults overwintered, averaged 37.5 ± 18.9% followed by lower infection prevalence during two summer collections (9.7 ± 4.1% and 7.3 ± 2.4%). Collections of H. halys from 31 sites in 11 states in 2017 and 2018 were evaluated and N. maddoxi was found in every state sampled, averaging 18.9 ± 4.3% infection. Prevalence of low-intensity infections was higher than high-intensity infections in both the phenology and the distribution study. Internal melanized tissues within infected H. halys adults are visible as brown spots through the abdominal cuticle and this physical sign can help indicate N. maddoxi infection: 74.2% of H. halys with these spots were infected; however, 30.0% of H. halys adults that did not have spots were infected.

"This study has shown that this pathogen is widely distributed throughout H. halys populations in the US, and infection prevalence is variable among sites and is seasonal, with the highest infection levels occurring when H. halys adults are aggregated," the scientists concluded.