The final paper about the Sweeper robot, which encloses all results, was published by the Journal of Field Robotics. In the paper, the researchers note that the results indicate that the performance of the robot could be increased by addressing occlusions and clusters of fruit. "Approaches like plant breeding, mechanical solutions, or growing architecture, and crop maintained strategies could help to achieve this", they say. 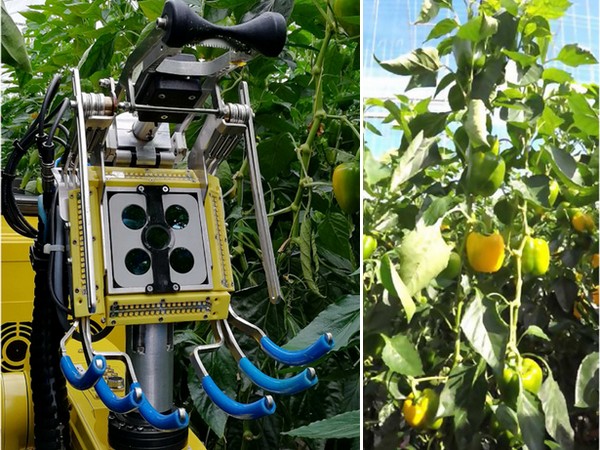 Sardinero
The hypothesis that the Sardinero crop variety would be more suitable for robotic harvesting compared with the Gialte variety could not be confirmed. It turned out that the longer and more vertical peduncles of Sardinero resulted in a less stable contact point for the knife such that sometimes the knife did not cut through but slipped off the peduncle. Furthermore, the longer peduncles increased the uncertainty about the exact location of the cutting point as the developed system only locates the fruit body and not the cutting point itself. This is also reflected by the observed higher end effector positioning errors for Sardinero. The hypothesis that a longer peduncle should reduce the risk of cutting into fruit body was not confirmed. As the fruit immediately drops down into the catching fingers once the peduncle is cut, typically no fruit damage occurs, even when the robot continues a bit more with the downwards cutting motion. This emphasizes the need for experimentation in real‐world conditions.

Bottlenecks and improvements
The field tests provided valuable insights in the performance of the integrated system and how its modules functioned together. A number of bottlenecks and possible improvements have been identified.

Ways to increase performance of the submodules for detection, reaching, cutting, and catching should be further investigated.

The performance results and failure analysis indicate that a different type of robot arm with an increased workspace and/or different mounting pose may improve the success rate. Compared with the overall size of the platform, the robotic arm (and its workspace) is rather small. However, an arm with longer joints will most likely also have more difficulties to plan and execute a collision free motion in this dense environment. An arm with more DOF will increase the computational efforts to plan the trajectory.

A smaller end effector would increase reachability and would decrease the risk of collisions with the crop. The end effector size can be reduced by using a smaller camera, light unit, or catching device.

Transportation of the fruit to the storage bin currently consumes a lot of time compared with the other actions. The speed of the manipulator should be increased or alternative ways of storing the fruit should be considered.

Another insight concerns error handling and uncertainty control. Currently, when the robot loses sight of the fruit or cannot reach a certain position, harvesting is simply aborted. Instead, the system should try to recover by backtracking to a point from which the operation can be resumed.