New agricultural robots and the challenges of a sector

As the need for task automation increases exponentially in the agricultural world, FIRA must support this change in progress.

This 4th edition of FIRA, the International Forum of Agricultural Robotics, was marked by a growing participation not only from manufacturers in the sector but also from farmers, seed companies, agro-food corporations and journalists.

By drawing together more than 850 participants from 42 different countries, and generating over 1,300 views on YouTube, FIRA has made Toulouse the world capital of agricultural robotics. With the attendance of some twenty world experts and the exhibition of dozens of robots and equipment, the event is now an unmissable meeting point for the players of a sector that is significantly developing.

Agricultural robotics: A global challenge
This was the first time that the five continents were represented at FIRA: 42 nationalities, including a Nigerian delegation, as well as participants from Australia, the United States, Israel, India and Nepal. 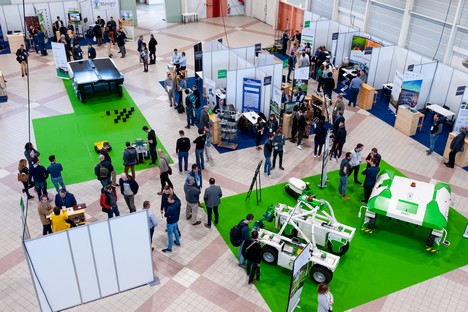 Here are the new features presented this year:

Professions and regulations are changing
In this context of increasing demands, FIRA must initiate networking between all the players in the sector to address two key issues: how to support farmers and their advisors when they first use these autonomous machines on their farms? What are the regulatory evolutions regarding agricultural robotics?

Four sector workshops were therefore organized to face the challenges of different types of production such as livestock, fruit and vegetables, field crops and viticulture, and thereby introducing farmers to the state of the art of robotics for their own needs.

This was followed by a training workshop “Agricultural robotics: my job is changing. What consequences and which supports?” organized by the Chamber of Agriculture of Occitanie and intended for farmers and advisors. Farmers were then invited to express their interest in hosting experiments within their farms.

Finally, the much anticipated round table presenting “Regulatory frameworks and standards for Agricultural Robots: where do we stand in Europe and in the world?” was held with the participation of the main global stakeholders in this major issue, including the AEM (American association of the agricultural equipment manufacturers), CEMA (its counterpart at European level), the European Commission and the OECD.

Robagri scientific symposium
The first scientific workshop organized by the Robagri association took place the second day and brought together an audience of some 200 people around topics on the reliability and safety of agricultural robots.

This event within the event was an opportunity to share the latest scientific advances of agricultural robotics on the three following items: Safety and control, Supervision and decision-making for mobile robots, Interaction between mobile robots and tools.

FIRA and GOFAR 2020
The organizers of the event concluded the conference day with the announcement of the actions planned for 2020 by the GOFAR Association which now implements the FIRA:

All the conferences and round tables - broadcast live from the event - are already online on FIRA’s Youtube channel, and will soon be available in full in French.

The presentations are also available on Slideshare.