Almeria, strike of the agricultural sector:

Demonstrations of a magnitude not seen in 30 years

The president of the Union of Independent Agricultural Producers (UAI), Joaquín López, better known by the traditional family name Bernabé, spoke with FreshPlaza a few minutes before the start of the demonstrations in the streets of Almeria, organized as part of the strike of the fruit and vegetable sector on November 19.

"Almeria stands right behind us; the seaport has become a parking lot and we expect between 15,000 and 20,000 protesters to take part in this peaceful march," said Joaquin.

"Producers have finally made their move. The UAI started the demonstrations and was joined by ASAJA, UPA and COAG, together with COEXPHAL and ECOHAL. This situation is unprecedented; producers stand united for the first time. It has taken 30 years to achieve this; to have marketers joining the protests," says Barnabas.

"Today we will be demonstrating in Almería until two or three in the afternoon. Then we will pay a visit to the private stores that will not close to avoid losing money. Tomorrow morning there will also be no sales or product shipping," says Joaquín López.

"Producers are standing together. They have become aware of the fact that they are the ones who end up paying for the product, and now they just want to say: Enough!" 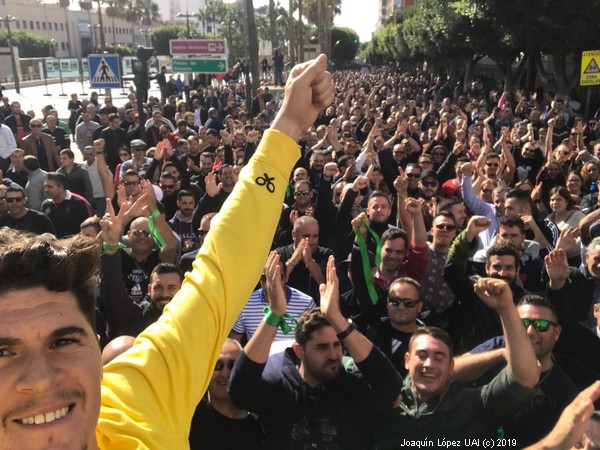 At the latest meeting, the UAI had 4,500 affiliates. The power of social media has allowed them to expand rapidly and now new applications are arriving, bringing the number of producers to 6,500.

“Agricultural producers are finally saying "Enough!" They are becoming aware of the fact that it is them who are paying for the product,” he says. “We need to eradicate the practices of trading organizations, large companies, distribution chains, etc.”.

“There is only one solution: to stand together. If producers unite, they become strong and nobody can fight them. The European Union and the big land owners are putting small producers at risk. Problems are blamed on the marketers who ship to the European Union, and the institutions are leaving the process in the hands of the big retailers,” says Barnabas.

“Only the producers own both the product and the problems. If we seek a solution to the problem, we will find it, but we can't keep selling at ridiculous prices.”

“The problem goes beyond the producer. We must analyze and control the agreements with third countries, It makes no sense to talk about overproduction when we are importing products,” said Joaquín López, aka Bernabé.