'Quality of native iceberg lettuce went down and inflow was limited'

In the case of iceberg lettuce, Spanish shipments were predominant. The Dutch and local season turned into the home straight: The quality of the goods weakened and the inflow was limited. Price quotes for rare and popular consumer items rose. Despite the high prices, they were simply scooped up. In Frankfurt, even the Spanish products were in short supply, as the supply was restricted by effects like rain in the growing regions as well as fixed quantities within the retail trade. At times, €17 per 10-piece box had to be paid there.

In the case of lettuce, the overall condition of domestic offers was increasingly getting less good. This was the reason why Belgian greenhouse goods then came into focus. The sizes of these were quite mixed in Munich, resulting in a wide range of prices.

It was here that the first Italian lots arrived, in wooden boxes of twelve, which cost about as much as the German batches. For colorful salads, local shipments could easily cover the demand. Italian suppliers tried to gain market share. Traders saw little reason to change their prices, because of continuous business. 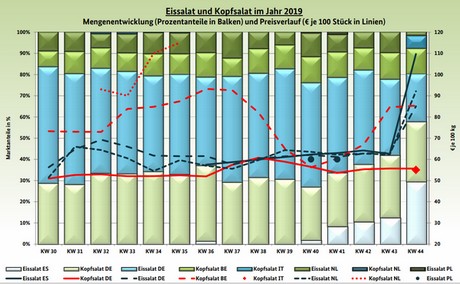 Domestic endives became a lot cheaper in Munich, which accelerated their sales. In Frankfurt, meanwhile, Italian goods supplemented the product range, that was dominated by Germany. The availability of Belgian and local lamb's lettuce was in line with demand, so that prices generally remained at their current level.

Apples
Almost all places reported lower prices, especially with regard to local fruits. This was done for different reasons; the autumn holidays played a role, as well as the rainy weather and the associated drop in demand.

Pears
The pear trade was calm and without highlights. Supply and demand were often in balance. Changes in prices were very rare.

Small citrus fruits
Clementines were sold predominantly. These came from Spain and Italy. With Clemenules, Marisol, Clemenrubi and Oronules some varieties were ready. The organoleptic properties were good overall.

Lemons
Spanish Primofiori prevailed. The demand was satisfied without difficulty. The prices remained stable. Here and there they dropped, resulting in brisker sales.

Bananas
In general, although calm sales were reported, they were relatively continuous. The autumn holiday period often reduced sales opportunities.

Cauliflower
Germany evidently shaped the scene. Demand grew locally, but this was not a problem since availability was sufficient to meet it.

Cucumbers
The demand could be satisfied without difficulty. However, sales were not always smooth, as popularity had slowed as a result of the autumn holidays.

Tomatoes
In general, demand was disappointing at several places; it could be satisfied quite easily. The prices developed unevenly.

Sweet peppers
Spain prevailed here. The Netherlands and Turkey came next. The supply was mostly harmonized with the demand.