There is currently an abundance of peppers on the global market. In fact, Spain and China are dealing with surpluses. South Africa, Mexico and Italy can be satisfied with the current state of the harvest. This situation is causing pepper prices to fall in most markets. Only in the United States does the price seem to be falling at a slower pace due to the seasonal change. Local stocks are running out and people are switching to peppers from California and Mexico. Favorable prices in earlier seasons have motivated an expansion of the acreage this year. 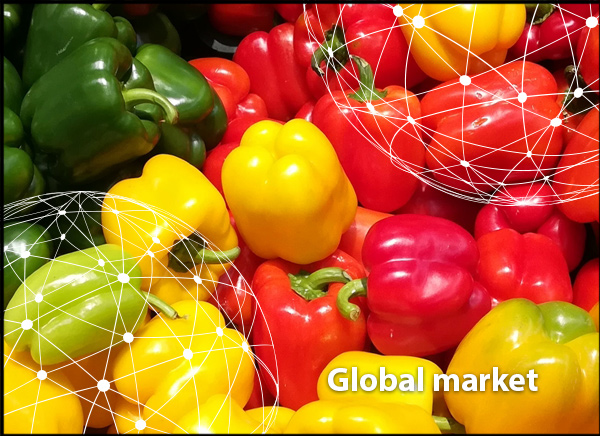 The Netherlands: Good pepper season, but not anymore
The Dutch pepper season is coming to an end. In the meantime, the Spanish supply is taking over the West European market and also setting the tone when it comes to pricing. Dutch growers' cooperatives are satisfied with the season; in recent weeks, however, the market has been very difficult, with considerable price differences between various sorts. Furthermore, the expansion of the acreage in Spain in the early segment has had an impact on prices, and things are not expected to get any better towards the end of the season. But other than the first three weeks and the last four weeks of the season, it has been a reasonable campaign for the Dutch growers.

Germany: Seasonal change is steadily underway
In Spain, exports are now starting at a quick pace. Together with Dutch peppers, the Spanish production determines the supply in the German market. Belgium, Poland and the domestic production complete the supply. Turkey also has a small share, especially when it comes to green and red peppers. The first Moroccan vegetables have also been marketed in Frankfurt.

The situation in the rest of the month will be determined by the seasonal change. "We have noticed that the prices of Dutch greenhouse vegetables have been rising since early September, coinciding with the reduction in the volumes. The quality is now also slowly, but surely decreasing, so as it's usually the case, we will be fully switching to the Spanish production by early November. In any case, sales of Dutch peppers and greenhouse vegetables have generally been higher in comparison," says a Bremen-based trader.

France: Substantial volumes and low prices
There are currently many different origins on the French market. This is having an impact on the price, according to a wholesaler. Moreover, the volumes are large and there is little demand, which entails even lower prices. The situation is the same for all colors.

Spain: Disastrous prices at the start of the season
The early pepper season is marked by poor prices. The nighttime temperatures are not yet low enough, and the volume of peppers in Almeria is too large. In the transitional period between seasons there has been an overlap with the Netherlands and Poland. There are also no opportunities for Europe to ship peppers to the North American market, now that Mexico has a sufficient volume.

The yellow and red peppers are the most popular for export and are clearly replacing the green peppers on the market. The Lampuyo is especially popular on the domestic market. There are other varieties gaining ground as well, such as the Sweet Palermo or the Tribelli mini. Others, such as the white pepper, remain unviable in Spain. The low prices are a problem for growers. After all, low prices in supermarkets are difficult to revert to the old level.

Italy: Pepper season going better than in previous two years
This year, peppers have been planted in various new locations in Italy. However, in areas where the crop has been cultivated for longer, the acreage has been reduced. In week 40, the sales campaign came to a close in Apulia. A few days ago, the season kicked off in Sicily and Metaponto. Prices for Sicilian peppers are slightly lower than last year (€ 0.80 / kilo, instead of € 1.00 / kilo). The supply is in balance with the demand; prices are stable and the quality is good. The Italians mainly demand Lamuyo peppers. 35% of the Italian market consists of yellow Lamuyo peppers and 65% of red Lamuyo. There is competition not only from Spain, but also from Dutch bell peppers. The dry summer in Italy prevented the appearance of fungus in the peppers; therefore, good yields per hectare are expected. At the moment, however, temperatures in southern Italy are rising above average and the heat is causing an increase in the population of white flies, which are harmful to the crop.

Israel: Season comparable to last year's
The pepper harvest in Israel kicks off in the second week of November. The expected yield can be compared with that of the previous season, when 90,000 tons of peppers were exported and 40 to 50,000 tons were consumed domestically. So far, the weather has been perfect for the peppers, although a storm in late October could still spoil the situation. The most important export market for Israeli peppers is Russia, since they have no European competition there. Depending on how the Mexican season goes, exports to the US may also be possible in November and December. Smaller growers are increasingly abandoning pepper cultivation because the labor costs are too high and the returns too low.

China: Despite the weather conditions, there is a surplus of peppers
The conditions on the pepper market in China have changed a lot compared to last year. Last year, a large part of the harvest was lost due to floods and typhoons. As a result, there was a smaller supply on the market and the price went up. This year, however, the growers were better prepared for the heavy rains and storms, and this has resulted in less significant damage than a year earlier. This year, most of the damage was caused by the Lekima typhoon, in the Shandong production area.

In any case, due to last year's good prices, many producers had decided to expand their productions this year. As a result, there is now a surplus of peppers on the market, especially in Hebei, Chongli, where the surplus is huge and growers are losing money on their sales, as the selling price is lower than the production costs.

United States: Demand for Californian and Mexican peppers is increasing again
The pepper volume in stock is currently comparable to last year's. The weather conditions have had an impact on the crops everywhere and it is a challenge for growers to provide a steady supply. There are still enough red peppers, while the season is coming to an end for the yellow and green ones. The volume available is becoming smaller as a result of the seasonal switch from California to warmer production regions, which is typical of the month of October. Local stocks in the US and Canada are also slowly running out. The demand for peppers is therefore increasing and this is something that California and Georgia in particular could benefit from. Given the reduced stocks, prices are currently rising on the market. The weather conditions have remained challenging throughout the season, leading to uncharacteristic peaks and troughs in the volume of peppers.

In Mexico, the pepper harvest is now going in full swing. Production in the country is shifting from Central Mexico to the north.

South Africa: Warm weather ensures sufficient supply of peppers
The heat in South Africa has resulted in a large volume of peppers from Limpopo and the northwestern province, although traders went through a somewhat quiet period last week in Gauteng. The warm weather is facilitating the coloring of the crop. This guarantees a large volume of red and yellow peppers. The warm weather and the sun are also causing the peppers to suffer sunburn. The peppers affected by this are used by the processing industry. The north of the country currently supplies peppers to the domestic market, with Limpopo traditionally being the largest producer in the winter months. Growers in the Cape are already planting their peppers.

Australia: Growing volumes, especially for the domestic market
The volume of Australian peppers grew by 4% last year, although the value fell by 10%. The export of peppers stood at a minimum of 317 tons last year, which entailed a 10% drop compared to 2017. Imports also fell, especially those from New Zealand, while those from China, India and Vietnam actually doubled. The production appears to be increasing every year, mainly thanks to greenhouses in the southern states.