"In China, there is room for increasing knowledge and developing a new generation of entrepreneurs"

This year, the second edition of the Urban Greenhouse Challenge is being organized by Wageningen University & Research (WUR), in which student teams are tasked to design a greenhouse in Dongguan, China. The challenge was officially kicked off this week at the university campus.

The kick-off event started with a word of welcome from Arthur Mol, WUR's Rector Magnificus. That morning, he received an old friend of his: Chen Jining, the mayor of Beijing. "He was coming here to look at how Dutch greenhouses and agriculture are developed. I told him about this challenge, and he was extremely interested - especially in the outcome, but also in the process." 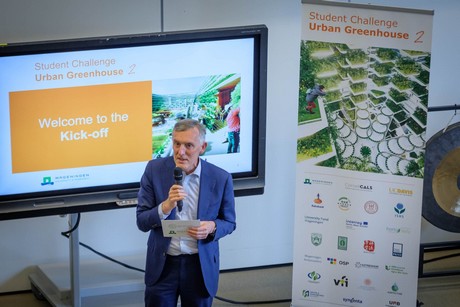 Arthur emphasized the learning aspect of the urban greenhouse challenge. "That's why we don't just need technical people who know how plants are growing or know how to design a greenhouse structure. We also need people who are good at setting up community development programs."

Back to the Future
Cindy van Rijswick, Senior Industry Analyst Fresh Produce at Rabobank and one of the jury members for the challenge, took to the stage to discuss opportunities in the fresh produce supply chain. She pointed out recent developments in the delivery of food to the consumer, where food isn't just food, but a service in itself.

Greening of cities is another big opportunity for the horticulture industry, Cindy noted. Local production is a major trend as well, with consumers willing to pay a premium for produce that was cultivated locally. Another trend Cindy notices is the move toward automation, to the point where fields might be completely devoid of people - and indoor farming is growing globally as well, a development that will only be accelerated by climate change.

Cindy's conclusion is that agriculture will move 'back to the future'. There's a movement towards more and more modernization, but at the same time, the world is also going 'back' to permaculture and more traditional ways of farming. In the end, both will be combined - traditional cultivation will make use of all the modern techniques we have nowadays.

Green cities, urbanization and energy
Next up was the Director of Strategic Development in China for the Dutch Greenhouse Delta: Tiffany Tsui. In her presentation, Tiffany focused on the multidisciplinary nature of greening cities. She pointed out that the concept of green cities might mean very different things, depending on who you ask: it could be a city that's full of parks, but a city where public services run efficiently to reduce pollution and increase security can be just as much a green city.

China is seeing major urbanization at the moment, which is a big reason for the country's government to improve and upgrade food production facilities, for instance through the developments of agro parks. Most of those megacities are located at the coast, away from the agricultural lands in the west. On top of that, only a small amount of land is allocated for agriculture, meaning production needs to be high, and located near the consumer. 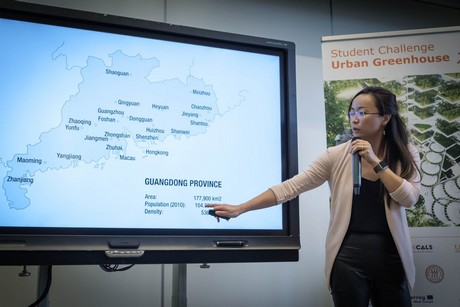 Tiffany also had a bit of specific advise for the participating students. The region where the challenge takes place has the highest urban density in China. The lack of agricultural land means those people need to be served with indoor agriculture. And the big challenge there, Tiffany notes, is energy. "Even if you cover your building with the most efficient PV, you can only cover 17% of the power demand for food production. Because energy is such a huge problem, if you don't properly solve the consumer positioning, then the benefit of producing close to the city will be cancelled out."

Discussion
The kick-off event ended with a roundtable discussion, moderated by Francesco Orsini, associate professor with the University of Bologna, and also a member of the International Society for Horticultural Science. Asked about the importance of certification for produce from urban greenhouses, Cindy explained that no matter the production system, the product still needs to be good. Consumers are more interested in buying good produce than in how their fruit and vegetables ended up in the supermarket.

Getting back to the integral system aspect of urban agriculture, Tiffany highlighted water management. In the Dongguan region, there are monsoons - meaning that sometimes there's very heavy rainfall, and sometimes there's a shortage of water. The participating teams will have to deal with that aspect somehow. 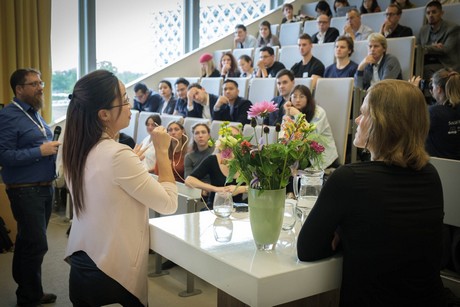 Then Francesco posed a difficult question - what should the greenhouse look like, keeping in mind it has to cater to the growing middle class in China? Tiffany: "In China, if you look at the greenhouse structures, I think there is room for increasing knowledge and developing the new generation of entrepreneurs and farmers, and providing supporting infrastructure in financing and innovative capacity. I think that's a more meaningful topic to discuss, or at least equally important as discussing different technical systems. Because for a country like China, you need space for all different kinds of systems: low-tech, mid-tech, high-tech, vertical, integrated function or pure production."

Finally, Cindy was asked about the value of urban farms in addition to that of the food they produce. "Currently, the value proposition of urban farms or vertical farms is really difficult for us as a bank. We have a few clients that do vertical farming, but most of them are in breeding or propagation, so for them, it's more an R&D expenditure, so it's a different business model. We have a few clients that are financed by investors that do vertical farming, but it's a business model that's still extremely difficult.

"There are some companies that have a vertical farm with restaurants or things like that. Those make more money from the products and services they sell than with the actual farming, and that remains a challenge, because you still want to make money on food, operating in a market that's fairly commoditized - unless you have very specific niche products that sell at a high value." 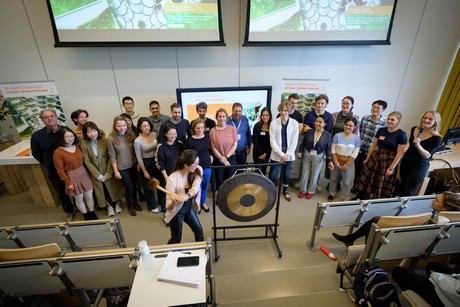 Following the discussion, the Urban Greenhouse Challenge was officially opened with Tiffany striking a gong. The most photogenic people from the teams were asked to come to the front for a group picture, after which everyone was able to enjoy some networking, accompanied by a lunch. 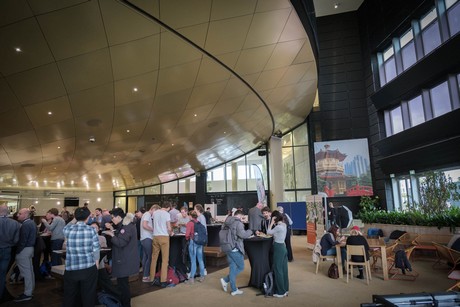 The Challenge is organized by WUR with support of a wide network of partners, amongst which Rabobank and Country Garden Agriculture, a Chinese developer of agricultural parks.