With the inauguration of the ALTMARKTgarten on the roof of the new Oberhausen job center on September 26, 2019, the starting signal for the flagship project of the inFARMING® concept has been given.

Scientists from the Fraunhofer UMSICHT are researching on-site urban food production. Production systems and building infrastructures are linked to each other so that material and energy flows can be sustainably used for the cultivation of fruit, vegetables or herbs.

Worldwide, there is a steady growth of cities and megacities. Forecasts assume that in the year 2050 about 75% * of the population will live in cities. Their sustainable supply of regional food is an enormous challenge, because areas for the cultivation of food crops are locally unavailable. What is needed are new concepts for urban food production.

At present, various options are being explored worldwide for how this production can be realized with the optimal use of resources such as energy, water and nutrients. With the inFARMING® concept, Fraunhofer UMSICHT has developed a promising approach that links production systems and building infrastructures. 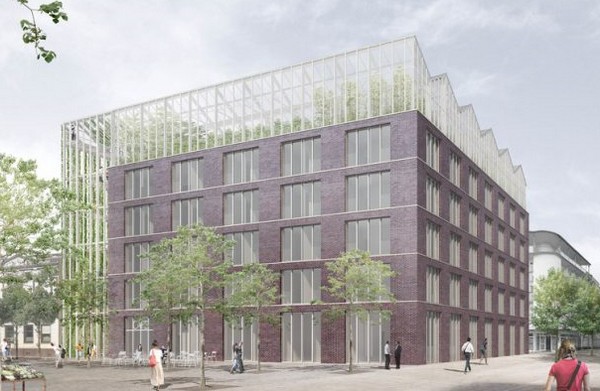 The facade of the job center / Image: Fraunhofer Institute

Cultivation in different climates
With the ALTMARKTgarten on the roof of the new job center in Oberhausen, a center for sustainable regional food supply has emerged that is based on the inFARMING® concept and is unique in Germany in this form. Fruit, vegetables and the like will be cultivated in three different climate zones. Also, research will be carried out in a fourth climate zone.

The individual zones of the roof greenhouse can be controlled separately, depending on the need for temperature and humidity of the plants. Another special feature is that the production-oriented areas use different cultivation systems. In addition to the ebb-tide tables, which supply plants with time-controlled flooding with water and nutrients, they are grown in UV-stable growbags. Fertilization and addition of water take place here by drip irrigation; excess water is returned through a channel system in the water cycle. In another culture system, the plants are on culture plates (floats / pontoons) in swimming ponds. Recesses in the plates provide support and allow direct rooting in the water.

All culturing systems used are thus hydroponic, i. H. the plants are nourished by an aqueous solution. A fertilizer machine controls the nutrient supply individually adapted to plants and cultivation system. 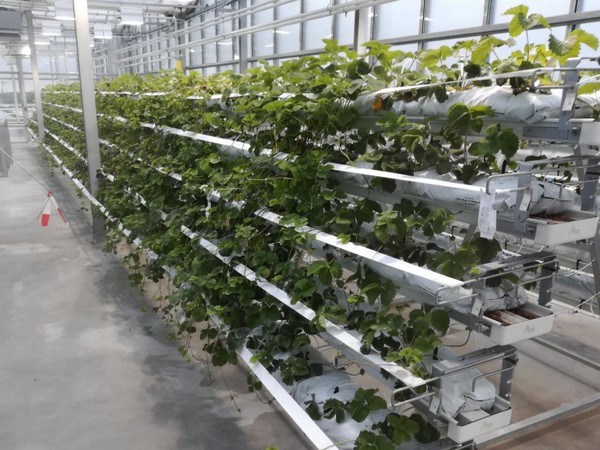 The building as a resource
The usable area of ​​the roof greenhouse is more than 1 000 m², of which the Fraunhofer UMSICHT will operate 160 m² of research and development (R & D). "Together with companies from different sectors, we can test and develop the latest developments and technologies in the field of building-integrated agriculture," explains Volkmar Keuter, head of the photonics and environment department at the Fraunhofer UMSICHT. The building serves as a resource. Keuter: "We are investigating -for example- how far water flows or waste heat from the building can be used to grow the plants."

The waste heat is led from the job center directly into the R & D area. 'Gray water' - water from showers and hand wash basins - is processed in the cellar. On the one hand, so that it can be used inside the building, on the other hand to test the use for irrigation in the R & D area. Exposure is also a focus of the researchers, because certain lighting scenarios can positively influence plant growth and plant quality.

For the Fraunhofer UMSICHT, the ALTMARKT garden offers good conditions: After the development phase, the results of the research projects can theoretically be tested in practice on site.

A look into the high-tech complex / Image: Meteor Systems BV

Sustainable and close to the clientele
The inFARMING® concept minimizes transport routes between cultivation and consumption by locally marketing the rooftop vegetables in urban areas. Using resources optimally and closing material cycles can reduce energy consumption, carbon emissions and waste. The ALTMARKTgarten is currently focusing on the optimization of water consumption. Further advantages: The urban image is positively enriched, and the surface sealing is reduced, as already built-up areas - such as the building roof of the new job center - serve as a growing area.

Already in advance, the population was informed extensively about the ALTMARKTgarten at several events. There is also a central information pavilion in the city center. A survey of the citizens of Oberhausen revealed that the majority view the project positively. 80 percent of respondents plan to visit the rooftop greenhouse, 70 percent see it as an asset to the city center.