Weather conditions in the Coachella Valley have been ideal for the upcoming bell pepper season, growers say. Temperatures have been close to the average for the time of year and no inclement weather has been recorded since the start of the growing season. The timing of the harvest is also considered to be on schedule, with the first bell peppers to be harvested in just over two weeks.

"We are due to begin our bell pepper season here in the Coachella Valley in mid-October," said John Burton of Peter Rabbit Farms. "Green peppers will be the first to be harvested, followed by red peppers a week later. Right now, we are experiencing exceptional weather conditions, with day time highs around 95 and nighttime temps in the 70s. There has been no rain or wind or any other disturbance to the crop."

Contrast between green and red pepper markets
Currently, the market for red peppers is very strong, with the East Coast particularly seeing notably higher prices. However, the western market is also showing strength. This is in contrast to the green pepper market, which is considered to be weak. According to Burton, supplies of green peppers are in abundance at the moment as the rest of California is still in production. However, this is expected to change over the coming weeks.

"At this time of year, the expectation is for the San Joaquin Valley and northern California regions to start slowing down," Burton explained. "The green pepper market is very poor at the moment, while the red pepper market has been strong for the last six to eight weeks. This situation is predicted to stabilize over the next few weeks in the lead up to the Coachella season." 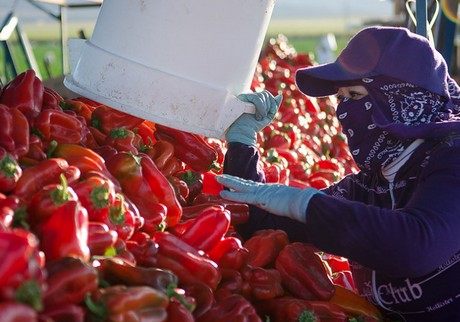 Packing in the fields
Overall, growers in Coachella are feeling optimistic about the season ahead, thanks to the ideal weather conditions and subsequently healthy crop. Peter Rabbit Farms packs its peppers in the field. According to Burton, the weather during the harvest typically lends itself well to packing the peppers in this way instead of in a packing shed.

"We maintain our excellent quality by field packing our peppers," he shared. "Because we typically have such nice weather during the harvest - with blue skies and dry conditions all day - it makes no sense to send them to a packing facility where there is a greater chance of damaging the product."