Talking about tomato-on-the-vine Provine, with and without VR glasses

"Keep to six and grow with sufficient space, the best way of growing"

How is the development in the head? Just one of the questions during a talk about the Provine, the tomato variety created by Nunhems* introduced officially last year which is going to fill the gap in fruit weight between large and middle tomatoes-on-the-vine. In an interactive setting led by a trio of experience experts, a cultivation plan for the variety was discussed, after which the greenhouse and the crops could be viewed with VR-glasses. 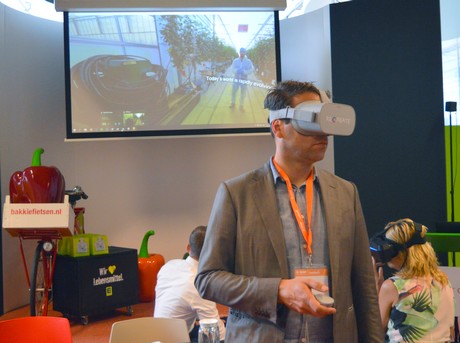 VR Glasses
The tour of the greenhouse with VR glasses resulted in hilarity, but was also an assist to make the technique even better applicable for the horticultural application.

It is a special experience, VR glasses on your face, which can feel as if 'you have already downed six stiff drinks', as the first grower/test person shortly but effectively described it. Still, there is a high chance this 'drunk experience', which the user of the glasses will quickly get used to, will become a regular part of 'being a grower'. It is a great way to look in the greenhouse, without having a fellow grower or cultivation adviser with you in the greenhouse, which is not as common as it was for a long time with the further increase of viruses and plagues.

What is early sowing?
Fortunately, it is still possible to sit around a table with colleagues and share tips and advice. They came together lead by Jan Hanemaaijer, BASF Vegetable Seeds, Bart de Bakker, tomato cultivation company De Bakker Westland, which this year had gained commercial production experience with the new variety growing in the Netherlands on ten hectare in total, and growth adviser Erik de Winter, Wingrow. With some stimulating statement, those present were challenged to share their experience and opinion, and that went well. 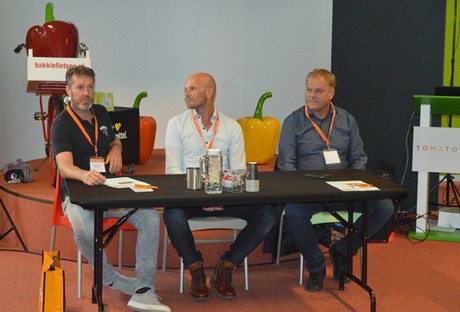 Provine, as had become clear from the tests and now from experience, is early in production. But does that make the variety only suitable for early sowing and then early planting? The response: "well, what is early sowing ? The discussion was started. At De Bakker, sowing took place on October 12 and the topped and grafted plants were planted at the end of November. Even before Christmas, on December 20 and 21 already, the first flowers appeared. Bart "And the first tomatoes were harvested in week 11. Make sure the days are not too long and keep an eye on flowering. Do not control too generatively, because the Provine is quite generative of itself."

AC-foil or not?
The discussion then turned to AC-foil. Yes or no? At De Bakker, the answer is 'no', also in the coming year, when planting and sowing will start a bit later. Erik is in favor of using foil in the beginning of the cultivation, even though the low gas prices make extra heating attractive and the investment in foil less attractive. Erik: "With foil, it is easier to achieve a high day temperature which is beneficial for the flower quality. Without foil, you run the risk that plants are too cold at moments". A member of the audience added that there has to be sufficiently light accompanying the high day temperature. 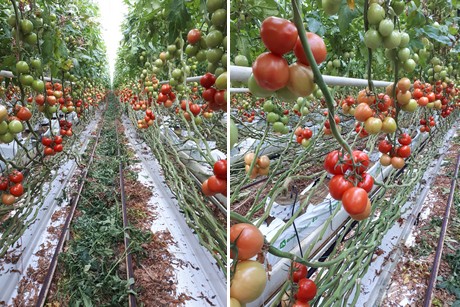 Sixes until far in the fall
But, to return to the statement: sowing later, is that possible? Erik: "Yes, but my advice is to heat to one degree higher, and pay attention that the plant does not become to vegetatively." The growers wanted to know whether continuing longer is possible in that situation? Jan: "Yes, it is certainly possible. Everything is about the manner of growing, of controlling, but the variety is not susceptible for Botrytis, has the complete package of available resistances, and is also not susceptible to yellow stems. It is no problem to harvest sixes further on in the season, if you standardly remove a truss at the end of summer to make it to the end of the year in good condition." That is also a tip, also by Bart, because at De Bakker they temporarily harvested at five, to proceed, after half July, harvesting at six until far in the fall.

Not too close, not too open
Another point of attention is the stem density. In general, the advice in Nunhem's cultivation plan is to steer towards a stem density of maximally 3.6 stems per square meter, and maybe even a bit less, at the end of the cultivation."Erik: "The crops are not to close to each other, with an heightened chance of cracked stems and somewhat elongated fruits, but also not too open, making the crop too vegetatively."

Considering all the points above, and not all points have been discussed (go to the cultivation specialists of BASF Vegetable Seeds), is the Provine an easy to grow variety? Erik: "Yes, if the growers keeps to the usual rules. Do not plant too close, and then harvest kilos from the sixes with a good fruit weight around the 140 gram." 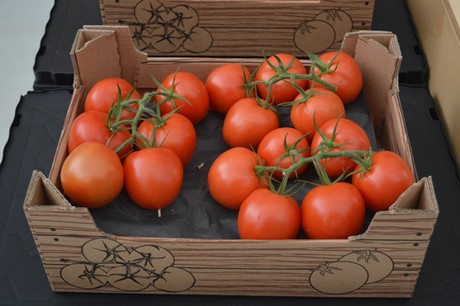 A tray of Provine

140 gram: large or middle?
140 gram, but what if the fruit weight is a bit higher, what does the grower put on the label the (German) retailer demands of him? How does the grower put his product on the market, or, for example in Belgium, with all the segmentation rules, how can he put the product on the market and keep to the rules? "Just look at the price", one of the growers joked. But more seriously, in practice it is sooner large than middle."

Large grower, no 'gluttons'
Before the VR glasses with 360 degree video, developed together with Recreate, could be put on, it was time for two more statement. One was about nutrients and irrigation, concluding that the Provine is not really a 'glutton' and that keeping to a low nitrogen schedule is recommended to keep the crop from becoming too vegetatively.

Moreover, the plant must not grow too fast, which introduced the last pint. Is the variety suited for lower, older greenhouses? [JH2] At De Bakker, 3m 30 is just enough, but 3m 50 wire height is ideal, a grower 'defended the Provine'. So greenhouse builders, pay attention: Provine requires a high greenhouse, because it is a grower, both in centimeters (on average 24 per week), as in hectares.

At least, that is the expectation of BASF Vegetable Seeds for next year. "On top of the current ten hectare in the Netherlands, they will be some addition, while also in France, Scandinavian, Australia, and New Zealand a lot of Provine is being grown", Jan told the audience before a relaxed talk about the presentation and their VR experiences, while enjoying a bit of the Big Green Egg and a beverage at host Tomatoworld.

As of week 1 2020, the 20h lighting test with Provine and Adorion at BASF Vegetable Seeds in 's-Gravensande can be viewed on appointment.