“There are enough supplies out there right now,” says Jim Grabowski of Well-Pict in Watsonville, Ca. “We’re still getting strawberries out of Watsonville, Ca. The season is winding down there. Picking will continue until “the rains come”--so whenever it starts raining, or sometime mid to end of October, that’s the end of the Watsonville season.”

At the same time, Oxnard, Ca. is a week into picking its fall berries. “We’re looking at mid-October to mid-November for the peak weeks of that fall crop,” says Grabowski. “That’ll take us into Thanksgiving and then December. Oxnard was pretty much on schedule--it might have been a week early.”

Overall, Grabowski notes the volume currently is comparable to last year. “The market isn’t saturated but it’s a good workable volume right now,” says Grabowski. “We may get into a situation if Watsonville goes longer than we anticipate. Then there’s going to be an overlap with the peak out of Oxnard. That might make for an oversupply situation in that middle to end of October period.” 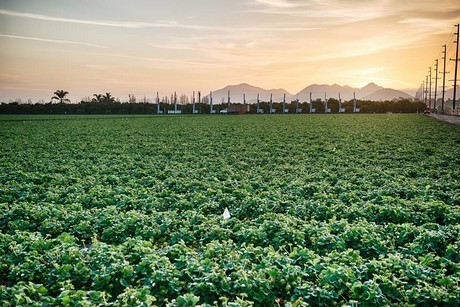 Competing with apples
Right now, for berries, California has virtually the domestic market to itself, though Grabowski adds that specialty berries such as raspberries and blackberries are being imported. “However, for competing fruit, in the springtime, we have the fruit market to ourselves,” he says. “In the summer we fight summer fruits in terms of stone fruits and melons and now we compete with fall fruits such as apples.”

That leaves demand as good, but not great, yet typical for this time of year. Pricing has also picked up from the spring and summertime lows. “Even though we had heavy volume in those months, we had heavier demand too,” he says. “Right now demand has slowed a bit and with the pricing going up, that could be why. It’s probably a steady market though—no peaks and valleys in the market. It’s pretty similar to last year at this time.”

Looking ahead, as Oxnard continues into its crop, Grabowski notes that the fall crop will be newer, fresher plants with stronger berries. “So we’ll see a good supply with better quality,” he says.