Fifth Season, an indoor farming company, announced plans for its first highly efficient, commercial-scale indoor vertical farm, which will open in early 2020 in Braddock, an historic steel town near Pittsburgh.

Fifth Season, originally founded as RoBotany Ltd., is a consumer-focused technology company that was incubated at Carnegie Mellon University's (CMU) Swartz Center for Entrepreneurship—an alliance of CMU’s business, robotics and other schools focused on fostering innovation. The company has raised over $35 million to date led by Drive Capital and other private investors with close ties to CMU. Its leadership team has deep expertise in plant science, robotics, AI and systems engineering.

Fifth Season developed its technology with two R&D vertical farms in Pittsburgh’s South Side neighborhood. Their leafy greens have been sold at local retailers, such as Giant Eagle and Whole Foods Market, along with popular Pittsburgh restaurants Superior Motors, honeygrow and Kahuna. Produce from the flagship production farm coming to Braddock will also be available in Pittsburgh-area grocery stores and restaurants. 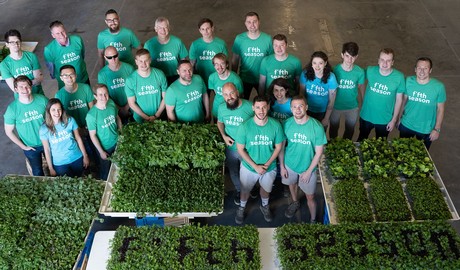 "The goal through our first three years of development was to prove we could bring fresh food to urban customers at prices competitive with conventionally grown produce," Webb said.

"We have developed fully integrated, proprietary technology to completely control the hydroponic growing process and optimize key factors such as energy, labor usage and crop output," Webb added. "The result is a vertical farm design that has over twice the efficiency and grow capacity of traditional vertical farms. Our unprecedented low costs set a new standard for the future of the industry."

Webb said the Braddock farm’s ideal growing environment will deliver perfect, pure produce, in any season. It will produce over 500,000 pounds of lettuce, spinach, kale, arugula and herbs from its 25,000-square-foot grow room during the first full year of operation. The facility is partially solar-powered and requires 95 percent less water compared to traditional growing operations.