Ex-Hurricane Lorena traveled along the western coast of Mexico late last week, dumping upwards of 150mm of rain in some areas. The hurricane skirted Colima on Friday and at one point was predicted to travel along the Baja California peninsula Saturday and Sunday. However, it changed course and crossed the Gulf of California instead.

Initially, Lorena swept past Colima, where a number of fruit and vegetables are in production, especially tropical fruits. However, growers did not report any significant impacts there, aside from rain. "Damage on the farms was minimal," observed Lance Peterson of Super Starr International, which grows papayas in the region. "We had rain but no wind, and farms were set up with good drainage. A few trees had fallen over because of the moisture and weight of the fruit on the trees, but we are not expecting any quality issues in our area."

Juan Carlos Martinez of Chula Brand Produce, shared a similar story with its pineapple and papaya fields. "Damage was minimal for our papaya and pineapple fields," he said. "Some received more rain than others, but good drainage infrastructure helped to clear the excess water off the fields."

Baja growers also escape the worst
While flash flooding was expected in isolated areas of northwestern Mexico coast, the change of direction likely spared the produce growing areas that are in production at this time of year. Felipe Vargas of Master's Touch, said some rain fell in the region, but it did not cause any damage.

"The news from our tomato ranches in Baja is that there was no negative impact from Hurricane Lorena," he said. "They did record some rain but it wasn't anything to be concerned about. From the tomato production and market perspective, there was no bad news." 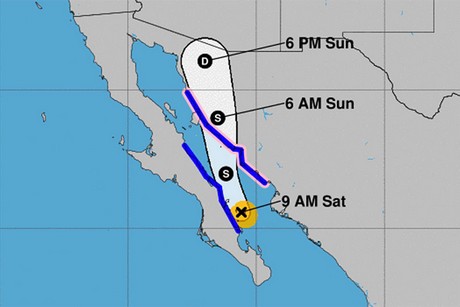 Similarly, Alamo Produce, which grows a number of different fruit and vegetables in various regions in Mexico, did not report any major issues. The company is about to ramp up hot pepper production in the northwest. Supplies are slow, but reportedly not due to the hurricane.

"The market is very slow and we have seen limited supplies of hot peppers," explained Jesse Rodriguez of Alamo Produce. "Hurricane Lorena did not impact our hot pepper production except for a small amount of rain. Overall, it's been business as usual."

Upcoming Sonora asparagus season
After Lorena passed through Baja and across the Gulf of California, it headed for Sonora. This region sees production during the northern winter months, but there was not enough rain or wind to cause any damage to fields. Asparagus will be due to start production towards the end of this year, and Bram Hulshoff of Desert Farms said everything is on track for a normal start.

"There have been no reports of any damage to our fields," he shared. "There was only a moderate amount of rain which will likely benefit the fields. Asparagus remains in the ground for many years and shoots up its spears each season. We have changed out one of our fields during the off season and expect to have similar volume as last year."

Hurricane Lorena has since dissipated, but the ex-tropical low will likely bring some rain to parts of Arizona and New Mexico in the coming days.