Strawberries at Kwekerij Hoogsewetering flew out of greenhouse because of heatwave

"We want to be able to harvest early, but we don't want to be done this early"

The second half of September just started, but in Pijnacker, the Netherlands the majority of the strawberries have already been harvested. Due to heatwaves in July and August, the strawberries flew out of the greenhouse at Strawberry Nursery Hoogsewetering. Faster than planned because of the ‘weird weather’. "In view of our home sales, we always want to be super early, but now we have harvested the greenhouse about empty in three weeks and that was not entirely the intention," smiles Monique. 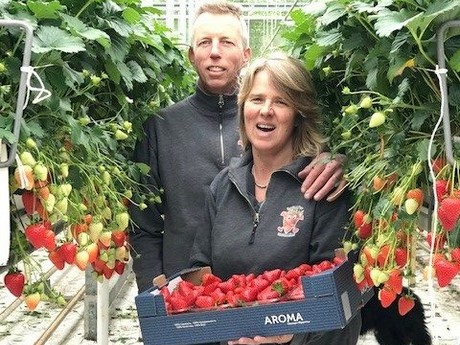 Together with her husband Richard she has been growing strawberries since autumn 2011 in a greenhouse of 9,000 square meters. From 2016, strawberries of the Malling Centenary variety. “For autumn cultivation, we consciously plant early, already in mid-July. Most growers grow Elsanta and are a bit later. This year, just after we had planted, we had a heatwave, resulting quickly in a lot of bunches on the plant. A second heatwave in August caused the strawberries to begin to color en masse. With four additional people, we harvested the greenhouse almost empty in three weeks."

The last day of sale from home was on September 13. The local supermarket can still count on strawberries for a week or three or four. “We simply did not have enough strawberries available anymore. Nothing we can do about it," according to Monique. "You just are dependent on the weather."

Spread
The cultivation strategy will be carefully reviewed for next year. “This year we did not use 3000 square meters, because we did not have the right variety available for an autumn cultivation. The intention for next season now is to spread the planting a little and that can be done nicely with the 3000 extra square meters. That way we get a little more stretch in the harvest, at least that's the intention."

But that is next season. First we continue the harvest, even though the biggest peak is behind us. An advantage of Malling Centenary: the variety is a little more labor-friendly than Elsanta. "That did help us," concludes Monique. "We are going to do our best to put the plant back to rest so that by the end of March 2020 we will have strawberries for sale again."