A small low-pressure area at a high altitude results in abundant rainfall, and therefore a weather alarm is in place for Alicante, Valencia and Murcia. Today and tomorrow storms, heavy rains and high winds are expected to hit the regions.The fresh fruit and vegetable industry is bracing themselves for the weather. It is estimated up to 200 liters per square meter will come down within the next 12 hours.

The strongest storms are expected in the regions of Alicante, Valencia and Murcia. As a precaution the Spanish government has already closed numerous schools in those regions on Thursday and probably Friday. Code Orange applies to Almeria. The weather is expected to last over the weekend.

Thomas Bos from Thomasol, who has been living in Spain for 18 years, says he has never experienced anything like this before. "The schools are closed, gyms are closed. It's really unbelievable. Anyway, a weather alarm for the entire province of Murcia and Alicante is unique, that has never been seen before," says Thomas, who emphasizes that the situation can vary enormously locally. 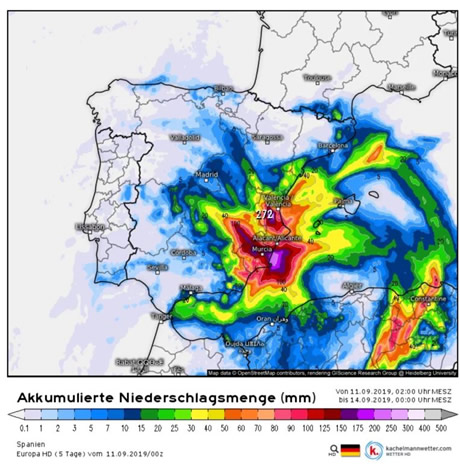 A trader from Murcia indicated this morning that although it has not rained as much as expected, the situation might worsen today. Out of precaution the traders will in any case leave home earlier this afternoon.

Cultivation
In Tarragona, Valencia and on the Balearic Islands, floods are caused by heavy rainfall, but growers association La Unió de Llauradors says there's little effect on cultivation so far. "The rain is good for the clementines and mandarins in Castellón. If the harvest starts at the end of October, then early November we will harvest larger sizes. The damage is bigger to the early Satsumas varieties in Valencia, especially if the water can't get out properly."

"This causes fungal infections on the citrus trees. Kakis are probably hit the worst since this is a very fragile fruit. In Alicante the pomegranates can burst due to the heavy rains and it will have an impact on the quality of the grapes. Infrastructure will probably be hit the worst. On the other hand, the excessive precipitation creates full reservoirs."

In Murcia, the worst is yet to come. Not even half of the acreage for the upcoming export season has been planted and the rain is expected to slow down the planting. Lettuce, broccoli and cauliflower will probably be harvested later.