For growers dealing with CGMMV this virus often is a recurring problem. The Cucumber green mottle mosaic virus is known for returning season after season. In Korea, growers chose to battle the virus with a seed treatment. “We’ve stopped the spreading of the virus with the Johnni-der V2 SEI”, they say.

The 9,000 cucumber plants in this Korean greenhouse now look virus-free, but some months ago the situation was completely different. During the spring season, this Korean grower had to deal with a CGMMV infection – something he knew to be reoccurring in the next seasons as well since the virus is very persistent.

That the plants now are virus-free occurred thanks to the application of Johnni-der V2 SEI, a product from JungWan B-F. The product is known to be able to limit the spreading of the virus. 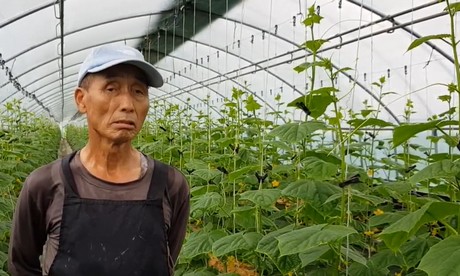 The 9,000 seeds were planted on June 30 and one month after plants still were virus-free. Remarkable, since the conditions are very favorable for the virus: It’s warm and humid and especially in summer the virus can spread out easily. “It rains and temperatures easily rise to 38 degrees Celsius”, he says. “Last year we even nearly decided to give up this crop – but following the protocol and the treatments with the Johnni-der V2 products this is off the table. The results are way better than we expected.”

Healthy young plants
It became clear rapidly how the seedlings and young plants treated by the seed treatment agent remained healthy: the plants were dark, looking quite stiff. “Totally different from non-treated young plants from other farms in the area during this time of year”, the grower says. During transplanting it was made sure the plants didn’t touch the residues of the earlier, infected crop. The better quality remained: During the season this continued: the plants show a short internode and a uniform growth and even development of nodes. “That’s important since the more nodes, the more yield we can achieve.”

“We see that the results are way better when the treatment is continued during the season than with only applying the Johnni-der V2 seed treatment”, the team with JungWan says.

Other crops
And they are looking towards the future again. So far, the tests have been limited to viruses caused by seed or soil dissemination, such as CGMMV. “Now we want to study how we can reduce infections by the insect vectors”, they explain. “This would make it possible to help growers of tomatoes and other crops as well.”