Peter Aarts, owner and cultivation manager of Dutch cucumber nursery 't Bleekerven, is growing cucumbers of the variety Gotja in Heusden, North Brabant, until mid-September. Then the fall tomatoes follow. The end of the cucumber cultivation is nearing. "Cultivation is progressing nicely and Gotja had to - like other varieties - withstand extremely hot weather. We see some wear and tear on the plant: the leaves are a bit smaller and the crop is a bit lackluster. You can see the plant hardly gets any rest. But Gotja still has many fruits and flowers. In other words: a strong plant." 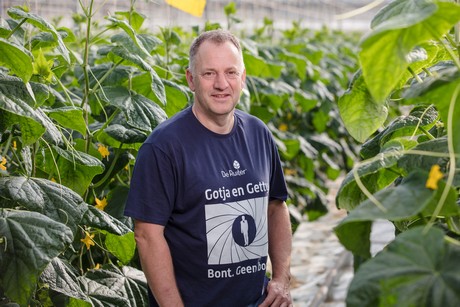 The hottest day
"On the hottest day, temperatures reached 40 degrees here. Then, just at the right moment and thanks to the plants, the greenhouse cooled down to 35 degrees, while the difference normally is only 2 degrees. But also during the heat, the balance in the plant was not bad. The summer settings are set to 19 degrees during the day and 16 degrees during the night. Based on the outside temperature, we lower this by 3 degrees. The minimum pipe temperature and window settings do the rest. If the morning is cool, we try to get the temperature down. We keep the vents open, and open the windows to a sliver at the end of the day."

Clean water
Peter continues: "Of course, water is very important during the heat. We then fall back to 2.2 Ec, while we are normally at 2.8. During extreme sunny and hot water, the plant needs clean water."

More sodium, less calcium
At the beginning of July, Peter had another leave analysis performed. Peter: "In the beginning of the cultivation, we added a lot of calcium. We see now, towards the end of the cultivation, that more sodium is needed. In the old leaf, it is still 8 micromol, but in the youngest leaf only 5 micromol. We add more sodium, which will all go to the fruits." 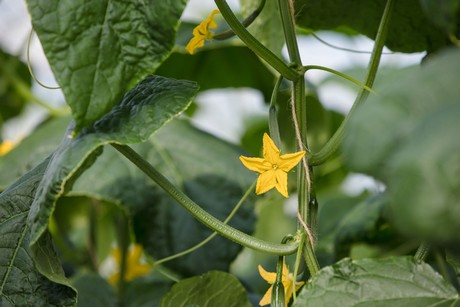 Developments in the plant
Peter continues: "We could fix the Gotja vines in two rounds, in which we could properly close the wires in the second round. That was the advantage of uniform plants. We have not pruned since and then you see differences in the plants arise. We make a weekly round to prevent mildew, alternating two greenhouses. We do have a bit of mildew now, but it is of no consequence. In the second week, we implemented organic protection, with the Swirski mite and the Speedex. But with this heat, the pathogen is growing faster than biology can handle. Other measures are now being taken."

410 gram on average
Peter is praising production: "The extreme conditions cost a little bit of production, but in general it is not too bad. The cucumbers are 410 gram on average with the perfect length for automatic processing. In the transition from stem to vine we saw a bit longer cucumbers, but Gotja is certainly not selective. Gotja, in terms of production, can absolutely get along with conventional varieties."