Heavy peppers yield the most because they are the least common

The fruit weight of peppers traditionally reduces slowly after the longest day. Heavier grades then naturally do well, because fewer and fewer of these peppers are cut. “The pepper market is always characterized by considerable highs and lows, but from week 30 onwards those extremes will decrease. Also this year. A fairly good year for all colors, with red as the outlier," confirms a trader.

Up to and including week 31, pricing was very good and productions were high. Many growers could record top productions this season during the usual production peaks that make bell pepper cultivation so challenging. For Hoogweg Paprikakwekerij in July one more reason for a special reward for employees.

After moderate setting, now massive setting
High productions were also achieved this year at Léon Barendse, grower of orange peppers. “In the summer we had a good, bright period that followed after a dark period. In that period, the setting lagged a bit behind and with the extra light, a massive setting followed. We are now reaping the benefits of that, so you see peak productions, although that ultimately also varies per grower.”

The prices have been lower in the last two weeks. Still many bell peppers are being harvested, but slightly fewer kilos. "Instead of 5 or 6 peppers for 1 kilo, you now need an average of 7 or 8," according to the trader. “On balance, you still have a lot of product, while it is the heavier sorts that bring in the highest price. After all, there are fewer of them." 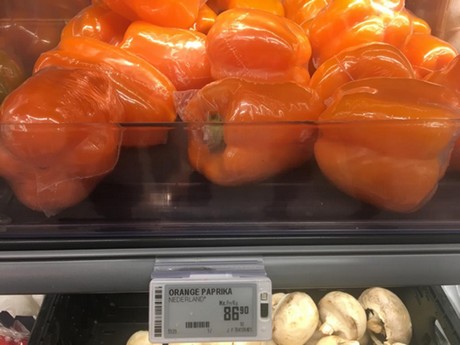 In addition to large markets such as Germany and England, you will also find Dutch peppers in Norway, as can be seen on this submitted photo. 86 crowns, or € 8.60 for a kilo, that doesn't sound bad at all.

Awaiting the changeover
Meanwhile, the quality of the peppers is holding up well despite the heat earlier this summer. The trader was expecting more problems after the weather extremes than was the case in the end. “Here and there you do see some tip rot or burn spots, but they can easily be picked out during sorting. We got through the heat well. ”

The trader expects to close the Dutch season well in the coming two months before switching to a Spanish product. "You will definitely notice the changeover in weeks 39-40."

In any case, Léon does not expect to get very good prices for his product in those weeks. “We still will have bell peppers until say about week 45-46, but in terms of prices it will certainly not be the best weeks. What still helps for your cost price is that most costs have already been incurred. In the past, the last few weeks sometimes were the better weeks, but now that Spain is getting in the market earlier and has its affairs increasingly in better order, it is more difficult. Certainly for the colors. With red you sometimes see better prices in the autumn."