Building an extra 4,000 square meters of greenhouse caused the cucumber grower Edwin Hendrickx quite a few headaches the past four years. The greenhouse has since been finished and Edwin now grows cucumbers the traditional way - with interplanting - on 2.4 hectares. But there was still one major headache that he had to take care of: the cucumber mosaic virus. One and a half years ago he succeeded in doing so. Edwin and Gerard Schepers of Cindro, producers of among others silver-stabilized hydrogen peroxide, tell the story of how they managed to do this. 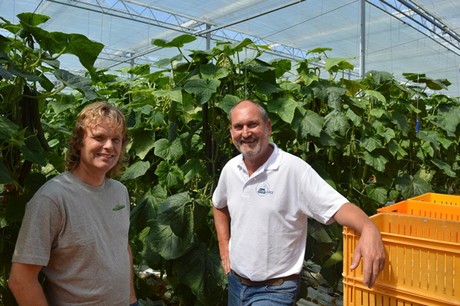 The cucumber mosaic virus has existed since the thirties but has especially in the past few years become an issue for Dutch and Belgian growers. "My own crops got infected in 2015. Then it subsequently was an issue for me in 2016 and 2017," says Edwin. "The virus infects the plant and causes spots on the cucumbers, which makes them impossible to sell. Just like that, you can lose one-third of your production. This causes, even with low prices as was the case in those years, huge losses and on top of that, puts a damper on your mood."

Choosing the best possible variety
What does a grower do when they run into problems in their greenhouse? They look for solutions. As was the case with Edwin. "You start trying things. When I discovered the first infected plants in May of 2015, I was forced to empty out the greenhouse earlier than I had planned. The advice at the time was to put down new mats, which was quite expensive. When I started growing again after cleaning out the entire greenhouse the infection came back after just thirteen days. It was enough to drive you crazy."

Another step that Edwin took was to look for a new variety that was more resistant to the virus. "These varieties definitely exist, but the most resistant varieties are not necessarily the ones with the best yields. On top of this, I drop off my product in Belgium at the auction BelOrta, which makes choosing varieties extra complicated. You see, there are only three mosaic virus-resistant varieties that are approved for sale in Belgium."

But even when a cucumber grower sells his produce in The Netherlands, the decisions are still about finding the variety with the least issues, according to Edwin. "Oftentimes it will be a variety with less yield, that does save money on labour, but there will also be varieties that are stronger and thus do not lose as much fruit."

The hygiene protocol was of course also tightened up. "This went well for a long time, but when the virus does pop-up 'obviously' it is your own fault," Edwin says affably. "I personally think that the virus often enters with the help of vermin, such as mice, or when a bird flies into the greenhouse. And when the virus is inside, it easily spreads via the drainwater, at least, that's what I think." 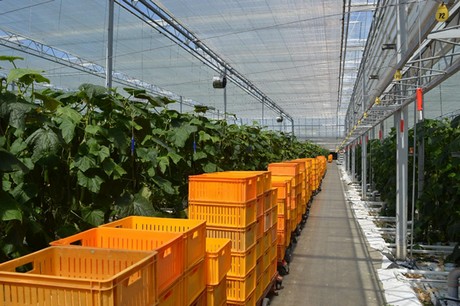 Clean and keep clean
At the end of 2016, Edwin came into contact with Gerard Schepers of Cindro, producers of silver-stabilized hydrogen peroxide (Oxyl-PRO S) and plant builders (Sinergy Defense). Gerard often visits growers as an advisor. "At the time we took stock of everything and then during the crop change at the end of 2017 we cleaned the entire greenhouse thoroughly with Oxyl-PRO S. Spraying, fogging, cleaning silos, disinfecting pipes and plugs, we went through the whole process."

Edwin adds: "On Gerard's advice, we gave the stands in the concrete paths an extra spray of silver-stabilized hydrogen peroxide. The previous years the whole greenhouse also got cleaned with hydrogen peroxide, but now I am rid of the virus, which we did not manage to do at the time."

To keep his greenhouse virus-free, Edwin adds a little bit of Exyl-PRO S to the irrigation water. "With the right concentration you will prevent a possible infection during the season," Gerard explains. "This is especially important with interplanting, because the greenhouse is never entirely empty during the season, this makes a thorough cleaning like during the crop change impossible. It is thus extra impressive that Edwin manages to keep his greenhouse virus-free. Other cucumber growers that were in trouble before have managed to get rid of the cucumber mosaic virus using Oxyl-PRO S."