The head of the cucumber crop will be removed next week and not long after that it is time for the summer holidays. So it was high time that the All Climate Greenhouse, greenhouse within a greenhouse bursting with technology, was officially opened in the World Horti Center. That happened recently in the presence of quite a few WHC participants by cutting a home-grown vegetable ribbon by two horticultural students. 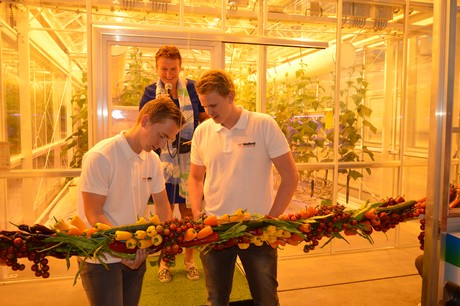 Martijn Reijm and Mike Zuidgeest cut the ribbon under the watchful eye of Atie de Gier in the background and a lot of participants surrounding out of the picture.

Control on moisture deficit
The honor of cutting the ribbon was awarded, undoubtedly not entirely coincidentally, to two sons of cucumber growers. One of them said that with the knowledge he now gains in the research greenhouse and during the course, he is now going to argue - "but without quarreling " - with his father. "He still controls on humidity, while here we learn that you have to control on humidity deficit."

To be able to measure this, the special greenhouse is full of sensors and the greenhouse is equipped with all the latest technology. Actually it concerns two greenhouses: a large greenhouse as an outer shell and within a somewhat smaller greenhouse with two sections. Every outside climate in the world can be simulated in the outer greenhouse, after which the inner greenhouse can be used to see how the cultivation of various crops can be optimized in that climate.

During the last period, one department was cooled and dehumidified, resulting in a nice-looking, strong crop. In the other department it was deliberately warmer, with the difference that in that greenhouse department more kilos were harvested from a crop that is looking less attractive. 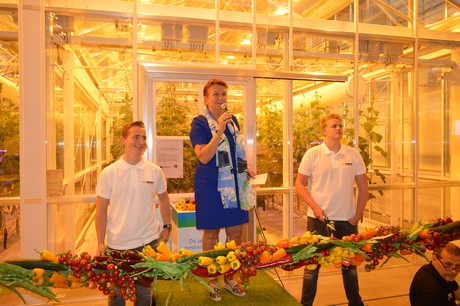 Solving a cultivation problem
During the opening it did not take long before solving the world food problem was mentioned. The main objective of the greenhouse horticulture sector is to make a contribution to this. For the students who are busy daily with growing in the greenhouse, it is not the first thing on their minds. Of course they want to grow a lot of good food in the future, but it concerns more concrete goals such as optimizing the climate under all the circumstances that now occupies them more. "You can ask yourself whether perhaps it is more a problem of cultivation instead of a world food problem," said one of them.

More contact participants with students
Suppliers want to contribute with all possible modern techniques to solve that cultivation problem and with that in the longer term also the world food problem. The All Climate Greenhouse gives them the opportunity to test those techniques, but above all, participation in the project is an extra opportunity for them to get in touch with students. 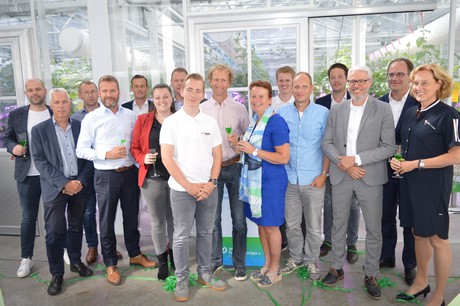 All parties, that helped make the special greenhouse possible, took a photo together after a toast and after a call from Atie de Gier to report new research assignments to start testing a tomato crop after the summer. A total of eight parties: Demokwekerij Westland, Bom Groep, Ridder, Priva, Hoogendoorn Growth Management, Hortilux Schréder, AAB NL and Stolze.