Traders wonder: Will there be a relocation in 2023?

Fear for the future of the Cologne wholesale market

It was way back in 2007 that the Cologne City Council decided on a future relocation in 2020. Meanwhile, the ambitious new construction plans in Cologne-Marsdorf will be done only in 2023. But the groundbreaking ceremony for the new property is still pending and the interim negotiations are sluggish. Major suppliers Fruchtimport Rosenbaum and VanWylick in the meantime decided to give up their stand sales completely. Even the final shutdown of the wholesale market is now being feared, as emerged during a visit by FreshPlaza. 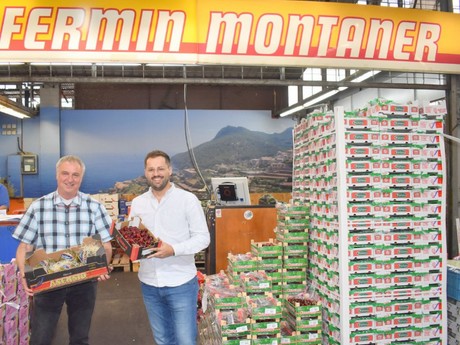 The competition with other wholesale markets in the Rhine-Ruhr area (Essen, Duisburg, Dusseldorf and Dortmund) was considered. Freshness Center Venlo - on the Dutch side of the border - was still by far the biggest competitor for the Cologne trading companies. Inside the market hall, the atmosphere was rather relaxed: "Companies compete with each other, but also complement each other", says Mr. Rieke (left on the picture next to Mr. Fermin Montaner Reinhardt).

The fact that the Cologne wholesale market continued to be run from the present location for several years without investments and repairs despite significant deficiencies, as well as the significantly delayed planning for the future location represent an enormous financial burden on the traders and entrepreneurs. The city of Cologne should therefore to relinquish further rent increases at the current location, says Interest Group Cologne in their recently published 10-point plan.

Turntable of the Cologne fresh supply
Michael Rieke is not only a consultant to the long-established Fermin Montaner company, but also spokesperson of the Cologne Interest Group, which represents some 35 trading companies. He emphasizes the heterogeneous structure of the wholesale market: "In addition to classic fresh trade, suppliers in the fields of delicatessen, canned goods etc. are also active on the site. The cultural diversity of the city of Cologne is represented here and we are an important hub in the supply of restaurateurs, specialty shops and the 39 weekly markets of the city. After all, well over 3.8 million people live in our supply area, ie the Cologne-Bonn metropolitan area, and we supply a total of 38 weekly markets, more than any other city in Germany. Without a wholesale market, it will not only be the specialized retailers and weekly market traders, who are buying cheaply here, that will sooner or later disappear, but the producers and direct marketers will suffer considerable economic losses within a wide area as well."

Mr. Rieke sees the move to the new location in Cologne-Marsdorf as a necessary step towards a sustainable and modern wholesale market. At the current location, the infrastructure no longer meets the requirements of today's fresh produce industry, where just-in-time delivery is part of everyday business. "We used to be on the outskirts of town when the site was built. Meanwhile, the situation has changed completely and the location is now in the heart of the Südstadt. The new, previously empty plot in Marsdorf, however, is located directly on the highway." 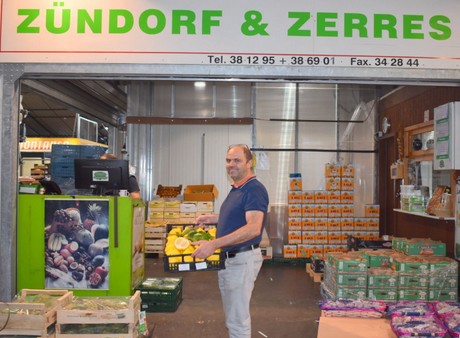 "Service suffers from the uncertainty"
Mr Fermin Montaner Reinhardt, a third generation manager of the company of the same name, has a critical view of the future. "We are slowly suffocated and we have no idea what will happen. Our service suffers from this uncertainty because we can not afford new investments in today's location. What we do, is actively reaching out to our customers and sharing our problems with them. Nevertheless, we hope that a final decision will be made soon which will be positive for all participants. After all, the end of the wholesale market would be disastrous for our customers." 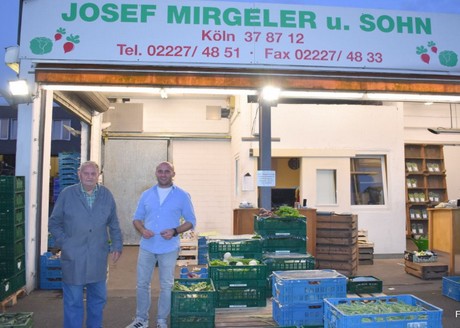 Emotional significance of the wholesale market
At family-owned company Mirgeler, father and son operate their wholesale market stall together. Despite his age, his father is still committed to the wholesale market: "3,000 people would become unemployed when the wholesale market would come to an end. That must not happen!" said the dedicated senior boss.The younger generation at the site in Cologne-Radeberg is also thinking about the future of the wholesale market, says Marcel Jeleniowski, who runs the company of the same name together with his mother. "I prefer areas where other companies are also represented, so that private customers can get there as well.The wholesale market could thus become more adventurous than is already the case in some places," says the young trader.

The relocation of the Hans-Peter Kutz GmbH + Co. also characterizes the daily customer discussions at the wholesale market. The current owner has been working with great passion on the wholesale market area for more than 15 years. His only hope is that a final decision will be made soon, he says. "The wholesale market has an emotional significance for me as a retailer and my family." At Zündorf & Zerres - one of the larger companies at the market hall - they are not worried at this time. "Regardless of the relocation, we will continue. We are already in the process of finding an alternative, individual location for our company if the wholesale market would come to an end," said Abdessalem Najar. 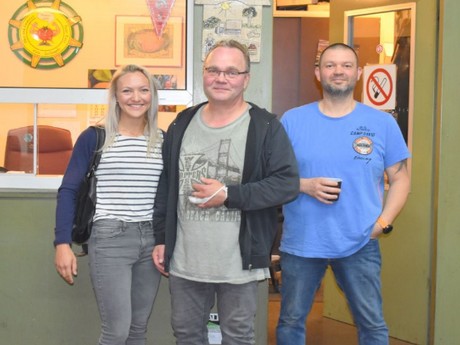 At the booth of Hans Peter Kutz GmbH.

Vicious circle
A possible demise of the wholesale market is not a complete impossibility, to the chagrin of the resident traders and entrepreneurs, but ultimately also to that of the citizens of Cologne. They fear an arbitrary situation in which some companies - such as packaging providers - are considered to be non-wholesale market conform or traders whose buildings are demolished prematurely on the wholesale market for construction projects, who will then be gone from the current wholesale market. The city administration also continues to hold back a report from early 2018, which should actually help to avoid applying for undue subsidies under EU law.

Regardless of all this, the city council requires participation from the wholesale market on the collection of a needs analysis and the like, but it is not participating in any way. No address data is made available, the offer to cooperate in the design of a suitable questionnaire was rejected, a planned joint information event with the IHK Cologne was not performed, etc. During all this, the wholesale market again and again addressed the council and the people of Cologne. But the council is postponing its decisions and the city continues to act at its own discretion. 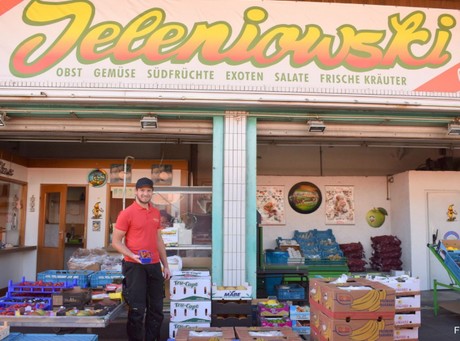 Marcel Jeleniowski at his booth

A round table discussion
The Cologne Chamber of Commerce and Industry is also involved in this whole process. In addition to many joint discussions with politicians and the city administration, the IG has also worked out a common concept on what a future wholesale market should look like. All this without real success up until this time. "We, the IG have already shown great initiative with the concept of remaining at the current location as part of the Ideas Competition for Park City South and the many measures and discussions. We would like to have a round table discussion where all those involved and those responsible will sit in, in order to shape the future of Cologne's wholesale market, which will be able to meet the needs of the citizens of Cologne for future generations," concludes Mr Rieke.