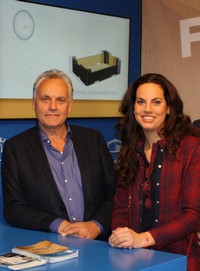 Ever since De Jong Packaging started back in 1995, the company has been aiming to expand their volume, and their specialization in corrugated cardboard packaging for the fresh produce and other industries has led to the gradual expansion in other markets like fresh produce, flowers and plants or eggs.

From the beginning, the company’s strategy has been to expand the market. This growth has been partially realized thanks to the growth of the core business, and partially thanks to taking over other companies that have been added to the group over the years. That said, not every candidate is the right fit for De Jong Packaging. A company needs to fit in with the group both in terms of character and activities. With two new takeovers, De Jong Packaging is continuing to build a solid foundation in Northwest Europe.

The most recent addition to De Jong Packaging’s portfolio are Gaster Wellpappe - a corrugated cardboard producer with locations in Heidelberg and Augsburg in Germany - and Rudico – producer of pre-print in Eerbeek in the Netherlands. Pre-print is pre-printed paper that gets turned into corrugated cardboard, this way the ripple effect, which is visible when printing directly on corrugated cardboard, can be prevented. “It is a good way to make beautiful boxes,” says Henk de Jong, owner of De Jong Packaging. “Rudico also makes clichés for printing machines, so we can now do that too. It was a good takeover.”

Consumer packaging
Traditionally, De Jong has always focused on transport packaging, but is now also making headway in the area of consumer packaging. Henk sees a major change in small packaging. Up until recently, apples, tomatoes or bananas were almost always packaged in plastic, now however there is a demand for cardboard bowls and trays for fruits and vegetables. “Cardboard is a great alternative for plastic usage. It is clean and renewable.”

Although the market for small packaging is relatively new to De Jong, it has great potential. “We have been asked so many times to think about cardboard consumer packaging by our customers that we have decided to invest in it.” 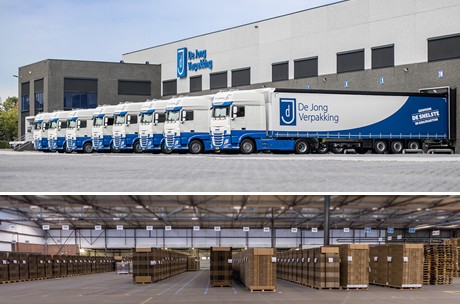 Cardboard outer packaging for fresh produce
Henk advocates, besides cardboard consumer packaging, to also consider the use of cardboard for the outer packaging of fresh produce. Cardboard offers a lot of advantages, especially when it comes to hygiene and the optimization of transport. Because cardboard is renewable, it is clean, and there is no chance of unwanted bacteria. Cardboard casks require less transport since they don’t weigh much and because, after being used, they get compressed and recycled. The recycling will take place in the country the casks have been transported to, the packaging doesn’t need to be sent back to the country it came from.

The transportation of the filled cardboard outer packaging is also more efficient. The boxes can be made to exactly match the size of the product that needs packaging, this way space is optimized so the entire box can be filled as well as the entire truck. “This is one great advantage when comparing to plastic, of which there are only 10 different sizes people can choose from,” Henk explains. At the moment, about half of all retailers are using cardboard for transportation packaging. The other half still opts to use plastic casks.

Renewable
The production of corrugated cardboard is mainly done by using recycled paper, supplemented with new paper if need be. The new paper is manufactured using wood from Scandinavia and Eastern Europe. In these countries, it is obligated to plant three new trees for every tree that gets cut down. “So the more paper we use, the more the forests grow,” Henk says.

Besides, around 80 to 90 percent of the cardboard gets reused as well. Cardboard can be reused about eight to ten times, after that it loses its strength. By using a mixture of new and recycled material, the paper can be reused many times. Henk points to a tomato box that is made of five layers of cardboard as an example of this. One of those layers will be made up of new paper and will provide enough fibers for a solid end product.

Distinguishing
Another example of ways the boxes can be reused is that you can print on them and thus distinguish them from others, you can even use them to convey your message. De Jong Packaging sees the need companies have to distinguish themselves from their competitors. “Especially when you want to make a name for your brand on the market, a box with a great print on it will definitely help to set you apart from the competition.”

Speed
Henk points out the fact that many clients in the fresh produce industry, where they work with fresh and perishable products, the speed with which the product is delivered is of the essence. Most of the time, the amount of products needed is known only shortly before shipping the boxes. For example, a tomato grower that maybe picks around three kilograms of tomatoes per m² in a sunny week but, if the weather isn’t permitting, only picks 1.5 kilograms. This difference in weight means a significant difference in the number of boxes the grower needs. The situation requires a custom made solution and thinking along with the customer. “This is where our strength lies. Delivering quickly and on time, having a large enough supply and never sell a ‘no’,” Henk explains.