According to information from the Thuringian State Statistics Office, a total of 11,150 tons of vegetables were harvested in 2018 in the Thüringer Greenhouses. That was around 100 tonnes or 1 percent less than the year before. With a total of 34 hectares, the greenhouse area was 3 hectares or 8 percent below the previous year's level. 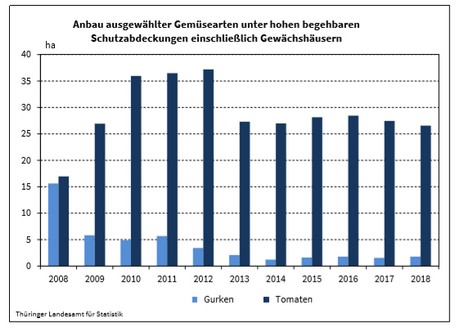 More than three quarters of the Thuringian greenhouse area (78 percent) was used for the cultivation of tomatoes. The total harvest of the 27 hectares of tomatoes amounted to 10,100 tons. That was 170 tons or 2 percent more than in 2017. An output of 380 tons per hectare was achieved. This was 19 tonnes or 5 percent above last year's level and at the same time at the level of the long-term average of the years 2012 to 2017. Cultivation of cucumbers took place on almost two hectares of the entire greenhouse area. With a yield of 57 tonnes per hectare, a total of 102 tonnes of cucumbers were harvested. Total tonnage was 16 percent below the 2017 level. 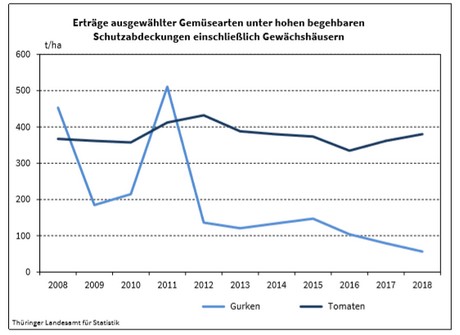