Agriculture of the future:

Are controlled environmental conditions the solution?

Worldwide, the number of megacities is increasing. As a result, food production and food consumption are becoming increasingly problematically, both locally and mentally. By 2050, according to UN predictions, 80% of the 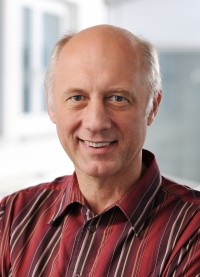 then 9.7 billion people will live in urban agglomerations. Gerald Friederici, industry expert and application consultant in the field of greenhouses,  comments on this in a guest article. "The growth of agricultural land for the necessary food production will hardly be feasible, especially without considerable environmental damage."

Further development of greenhouse technology
In addition to a number of other ideas, indoor farming is becoming the focus of food manufacturers as a further development of greenhouse technology. These closed greenhouses with reproducible growing conditions offer numerous benefits for the population, because this enables the production of healthy, natural and sustainably produced food close to the location to the consumers in big cities.

Well-managed commercial greenhouses already produce about 10 times the crop per unit area, when compared to outdoor cultivation. And this estimate does not take into account that indoor farming, at certain latitudes, makes food production possible that could not take place via outdoor cultivation.

But the creation of a controlled environment requires a very high initial investment. Compared to today's usual "semi-open" greenhouses made of poly-films, much more has to be invested in infrastructure and technology. Because of the water supply, the air conditioning, heating and lighting, there are many plant-specific parameters to consider. The prevention of vermin infestation or diseases is also eminently important and requires additional measures. 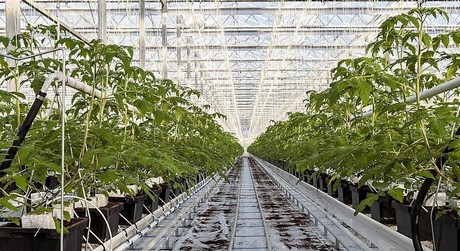 View into a greenhouse installation

Economy of indoor farming
In open land cultivation, light, heat, soil and water are available as a resource largely free of charge. The artificial environment, on the other hand, consumes not insignificant amounts of energy for lighting and environmental control. It noticeably reduces the profitability of indoor farms. Nevertheless, indoor farming can be very economical in the long term, because there are several advantages:

• Most of the water used can be recovered (> 80%).
• Using modern LED technology, it is possible to produce energy-efficient, plant-optimized light spectra. Above all, only plant-friendly (PAR) light is generated without "scattering losses". Even the simulation of a daylight curve is possible.
• By enriching the atmosphere with CO2, the yield can be significantly increased in closed greenhouses (for example, it works near primary energy plants as a CO2 sink).
• Significantly lower risk of vermin, weeds or diseases, therefore significantly less or no use of chemicals.
• Optimization of plants not with a view to environmental resillience (climate, pests, diseases), but with regard to taste and nutritional value.
• Artificial lighting can be produced throughout the year. This allows much more frequent harvesting than traditional outdoor farming
• Higher application rate per area; with vertical farming a multiplication effect.
• The transport costs to the consumer can be significantly reduced (theoretical production in the cities where the goods will be consumed)
• Less losses on the (shorter) transport route and surplus goods in the sales centers.
• No weather-related crop failures, optimized environmental conditions for the plants.
• Reduction of the greenhouse effect through the short delivery routes (for example, fuel savings in means of transport).
• Production can be planned. The results are not dependent on the seasonal weather. The right amount at the right time. In addition, this significantly reduces waste through the usual overproduction to compensate for crop failures.
• The loss of area for nature (flora and fauna) is greatly reduced in contrast to outdoor cultivation, thus promoting a natural, biodiverse environment.

Conserving resources
Indoor farming enables the production of healthy, rich and natural foods for a growing population in a resource-saving way. Due to the extensive control of the environmental parameters, quantity and quality can be planned.

This concept will be further enhanced in the future by further optimizations such as hydroponic or aeroponic cultivation (very little water consumption) and networked use of e.g. organic waste (keyword biogas production from plant waste for power generation for artificial lighting). First cycle-oriented approaches have been around for at least two decades. Several research projects were initiated in the first decade of the 21st century (for example, at the University of Life Science in Wageningen in the Netherlands).

Companies from the Netherlands in particular have perfected the cultivation in solid, permanent greenhouses (just under 5000 hectares at the end of 2017). Optimal use of light, sophisticated production technology and largely automated operation reduce the costs of these horizontal greenhouses. Thus, vegetable growers manage to score ecologically and economically in comparison to field crops, despite considerable initial costs. The Netherlands is now the world's largest agricultural exporter, after the US.

Vertical Farming - horizontal farming put on its side
A further optimization of land use is "Vertical Farming". Basically, the acreage is tilted by 90 degrees to the vertical. For some years, companies such as VertiCrop or Aero-farms have been implementing the first commercial indoor vertical greenhouses. They have proven that the idea of ​​being able to bring food production and urban consumers together again is very close. Because indoor vertical farming can, in principle, be realized in any industrial hall, on multi-storey car parks or in vacant skyscrapers. Full environmental control allows the industrialized production of nutritious and flavorful plants in repeatable quality right at the point of consumption.

Even the brother of Elon Musk, the well-known founder of Amazon, Space X and Tesla, has recognized the future opportunities of this very compact attachment. Kimbal Musk founded "Square Roots" together with Tobias Pegg. Large shipping containers contain complete vertical miniature greenhouses where young agricultural pioneers study and perfect this new crop. Square Roots uses technology developed by Freight-farms. The goal is to teach big cities to "feed themselves".

New forms of agriculture
In nearly 40 cities worldwide, more than 10 million people are concentrated in a small space. Front runner Tokyo brings it to nearly 40 million inhabitants in the metropolitan area. The supply of so many people in a confined space requires daily thousands of truckloads of different foods. Part of this transport volume could be avoided by urban agriculture with its circular economy, contributing to the reduction of global warming.

Start-up Infarm from Berlin shows that interest in this new form of agriculture is also present in Germany. With a cash injection of 20 million euros, the company started in early 2018 with its idea to look after the 1,000 small indoor farming units throughout Europe by the end of 2019.

Conclusion: Further development necessary
Still, the prices of vegetables, salads and fruits such as strawberries from outdoor production are often lower than from indoor farming production. Also, not every crop (e.g., cereals) can be grown through indoor farming. But large companies, for example many from the lighting industry, have already established research centers. They are ready to go with ready-made solutions for indoor farming.

Many companies in the field of greenhouse construction are also closely watching the further development in this area. Because as the population continues to grow, resources such as land and water are increasingly becoming a bottleneck. Products from indoor farming and vertical farming will then certainly be competitive and make their contribution to the nutrition of the world's population.