"Before the energy transition became a hot topic, geothermal energy was already on the agenda"

Nowadays no one is really surprised by the news about the drilling of a well to extract geothermal energy, but geothermal energy actually does not have such a long history at all in the Netherlands. Only in 2007 was the first well connected to tomato grower A & G van den Bosch from Bleiswijk.

The company, where Jean-Pierre Schenkeveld was employed at the time, arranged the first connection and not much later he was one of the initiators (together with his current Calor Holland colleagues Klaas Althof, Arno de Veld and Arco Vis) behind the Aardwarmte Plaza, a group of companies active in the geothermal sector. "At that time we actually just started with linking geothermal energy to existing greenhouse heating installations." 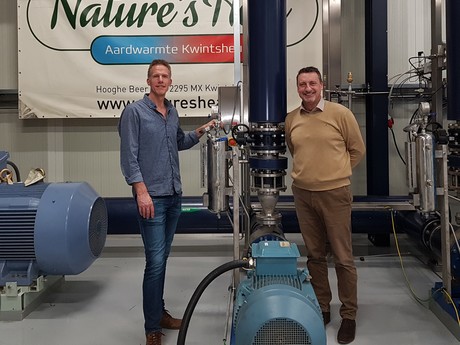 With the connection of the first well, soon a geothermal industry arose consisting of a number of companies with their own specific geothermal expertise. To bring these parties together, the Aardwarmte Plaza was established in 2009. "On the one hand to function as a walk-in platform where knowledge about geothermal energy could be shared, but also to make the companies that were active in it, together with the phenomenon of geothermal energy itself, more well known."

Meanwhile, the 'club' has grown and all partners together can tackle a geothermal energy project in all its aspects. Actually just like it was done at the very first project, for which the first discussions were held in 2005. "Although we were really pioneering, the well was performing as expected. As soon as the installation was started, it became apparent that the power that came from the well could heat the greenhouses properly."

Still great steps are being taken underground
Ten years later, the industry is increasingly able to meet the growing demand for geothermal energy safely and with high-quality installations. In the meantime, 23 projects have been started, of which also a number have come to a halt last year. Among others, the Staatstoezicht op de Mijnen (SodM, the inspection service that deals with mining but also geothermal energy) is involved, as this has also been noticed by Jean-Pierre.

"It is a good thing that the SodM is overseeing the sector. The sector has responded well to the reports about the risks of underground spills. Above ground, we are technically already very advanced, and also underground steps are being taken. Choices of material, for instance, and further developed well designs."

Last year, the Nature's Heat project was started in Kwintsheul. "The installation has been running smoothly for almost a year," says Jean-Pierre proudly. "And that with a very high supply security combined with a high return." With the installation technique, the technical problems usually occur in the first year, says Jean-Pierre. "The expectation is therefore that the design in combination with the selected materials and the know-how of all members of the Aardwarmte Plaza are going to ensure a long lifetime of the installation."

Connecting increasingly more homes as well
As is known to Jean-Pierre, there is one project planned for 2019. That would have been more if it was up to him. "In order to meet the climate targets, the number of drillings per year must be increased considerably. Partly with that you can really do something about the energy transition. At the moment we are actually just on the eve of that.

"In addition to greenhouse horticulture companies, increasingly more homes will be connected, while the construction of heat networks will continue to take shape. In principle, all the existing gas pipelines should soon be replaced by a heat pipeline. As soon as that is powered from a geothermal source, it does not really matter whether you connect it to homes or greenhouse horticulture businesses."

To provide information about these two options, all partners involved in Aardwarmte Plaza were present at the HortiContact. "The entire sector will always show up. It's nice to have a chat with everyone, after all you do not see each other every day. It is also a great opportunity to explain to growers and other interested parties, including municipalities, what geothermal energy means and what the partners of the Aardwarmte Plaza can stand for in the run-up to and during a project."