The saying that ‘many small things can add up to one big thing’ is currently being put into practice for the Tamarixia triozae biological control release programme. The parasitic wasp of Tomato Potato Psyllid (TPP) is being released on and around tomato greenhouses, potato fields and tamarillo orchards as part of the second year of the biological control release programme occurring in Auckland, Hawke’s Bay and Canterbury.

The programme to date has had some early success. From August 2017 to February 2018 Plant & Food Research carried out releases of up to 500 Tamarixia at a time onto boxthorn, a non-crop TPP host plant, at three sites in Hawke’s Bay and two sites in Canterbury. One month after these releases Plant & Food scientists collected TPP infested host plant material to see if Tamarixia had been able to find and parasitise its TPP host. The good news was that Tamarixia was recovered from three out of five release sites, which was an extremely positive indication that Tamarixia will survive and persist, and parasitise TPP, in the New Zealand environment. 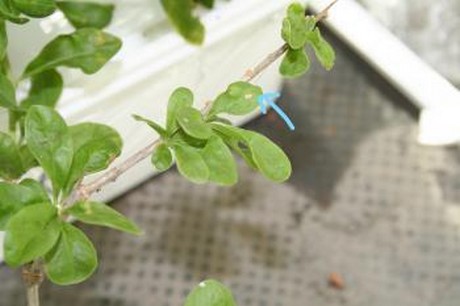 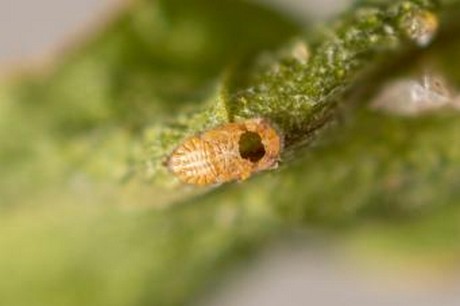 Successful parasitism is indicated by a hole in a TPP nymph. This hole shows that the Tamarixia adult has emerged from its host (Photo credit: Robert Lamberts, Plant & Food Research).

To test whether Tamarixia were able to establish and survive at the release sites through the winter months in early December 2018 the scientists revisited the Hawke’s Bay and Canterbury sites where Tamarixia were released to collect TPP infested boxthorn material. From this material scientists were able to rear Tamarixia from the two Canterbury release sites, and from two out of three Hawkes Bay sites. This means that under the right conditions Tamarixia will survive and over-winter on non-crop host plants. As Tamarixia is a new biological control for TPP in New Zealand, this is the first time that overwintering survival has been tested. While it is early days in the release programme, having only had a single winter period, the ability of Tamarixia to overwinter in these locations is an extremely positive result.

Following on from this, Plant & Food will continue to survey these sites to determine how well Tamarixia survives and the rates that Tamarixia parasitizes TPP.  They will also carry out surveys to find out how far Tamarixia has spread from these original release sites. This information will be used to develop recommendations for growers on how Tamarixia can be used in crops and surrounding environments.

The next step in the Tamarixia programme has been to carry out more releases which began in late November. These releases are being carried out directly by growers so that they get the chance to experience using Tamarixia in their crops. The growers who are participating in this next series of releases are primarily organic growers, this is to ensure that Tamarixia survival rates are maximised and are not affected by insecticide applications. At this stage, the release programme is aiming to maximise Tamarixia survival in cropping and non-cropping environments. Once it is better understood how and where Tamarixia will survive we can start to work with growers using more conventional growing systems.

To ensure a steady supply of Tamarixia for this second season of the releases we have teamed up with the Lincoln BHU Future Farming Centre to provide a steady supply of Tamarixia for release. The team of Shola Olaniyan and Charles Merfield are rearing Tamarixia in mesh cages to supply to the release programme. As Tamarixia needs live TPP nymphs to lay its eggs and complete its lifecycle this means rearing is not as straight forward as it might be for other insect biological controls. A live supply of TPP needs to be maintained alongside the Tamarixia so that the female Tamarixia have a live host to lay their eggs on. So far approximately 3,000 Tamarixia have been sent to growers to release, with more to follow over the next few months.