Spain: One of the most important tomato producers in the world

In 2017, Spain grew 4 times as many tomatoes as Morocco and 5.5 times more than the Netherlands. Turkey grew twice as much as Spain. China, the number one producer in the world, grew 11.5 times more than Spain. The total world production amounted to more than 180,000 million kilos, grown on an area of almost 5 million hectares.

According to data from Hortoinfo, supplied by Faostat, 182,301 million kilos of tomatoes were cultivated worldwide in 2017, which meant that a historic record was reached. Production has increased by 35.76% over the past 10 years. 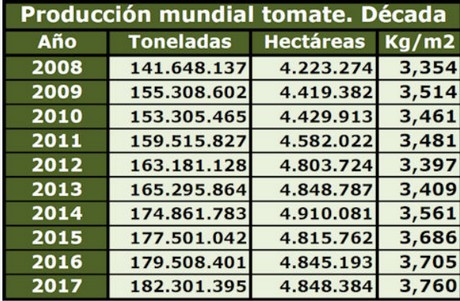 Worldwide, 4,848,384 hectares were used for tomato cultivation, with an average production of 3.76 kilos per m2. 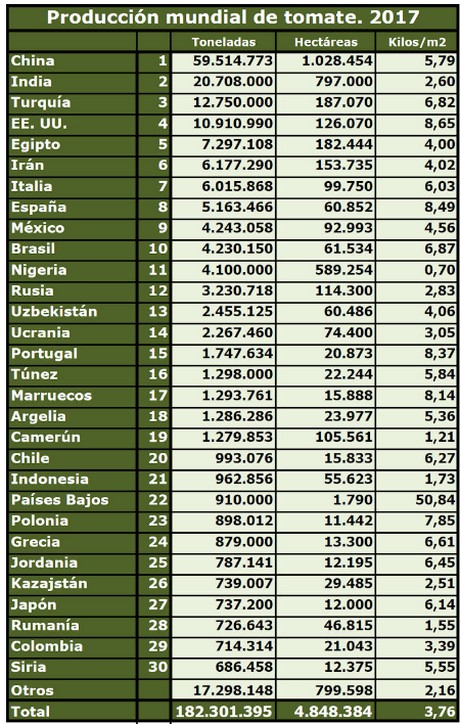 As stated earlier, China was the world's largest producer in 2017, with 32.64% of total cultivation and an average production of 5.79 kilos per m2.

The second largest grower in the world was India, with Turkey in third place, followed by the United States. Spain occupied the eighth place with a production of 5,163 million kilos, grown on an area of 60,852 hectares.

Dutch production amounted to 910 million kilos, with an area of 1,790 hectares.