What are the biggest pitfalls on the Chinese import market?

It isn’t easy to export to another country. You have to keep in mind a lot of things, and the products often have to meet specific requirements. Besides, exporting to a country like China, language and culture can also be a barrier. FruitMax is a company that’s professionally involved in helping foreign fruit growers who want to enter the Chinese market or who want to continue expanding on that market. They make sure the cooperation between their growers, buyers and local sales partners is efficient from the office in Shanghai. “We also act as eyes and ears for our growers and for our local distribution partners in China, because FruitMax allows them to be in constant and direct contact with the grower while always having a contact person within our team here in Shanghai,” Jaap Pees of FruitMax explains. He runs FruitMax with his trade partner Tony Huang. 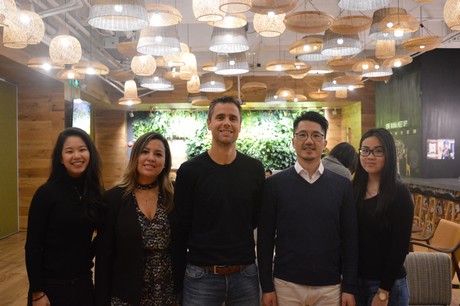 Pitfalls of export to China
According to Jaap, the Chinese import market is interesting because it’s a very young market that’s still in development and where many opportunities can be found. “Inherent in this is the unpredictability, price fluctuations and the fact that a lot of markets are still taking shape. This is one of the pitfalls companies can be faced with, and which might even scare them away unnecessarily. On the one hand, they hear about the many opportunities and potential, and on the other they sometimes personally experience a difficult start or disappointing results at first.” 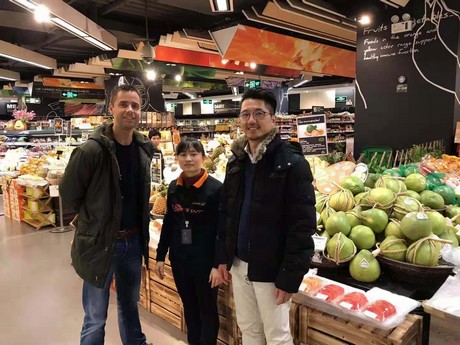 Jaap Pees and Tony Huang in a Chinese supermarket to take a look at packaging and prices.

“There definitely are opportunities and possibilities here, but China requires a long-term vision, a lot of patience and most of all, you have to constantly be locally present. We often see companies pulling out prematurely. In the end, it’s often in the little details, such as packaging, miscommunication, trust or simply a plan. We’re here to constantly guide this, to optimise this and to translate this for both our Chinese buyers and our growers. Our team therefore consists of a mix of cultures and languages, such as Chinese, Dutch and Spanish,” Jaap says.

FruitMax also guides the process of clearance and works closely with local agents. “Besides, we’re always present when a container is opened. This is to prevent any abuses and solving these when necessary. As said before, a Chinese buyer often experiences problems regarding very small details, but you can only find out about this when you’re actually on the spot and when you’re constantly talking to the buyers. This is much more efficient than communicating over long distances with time differences and language barriers and the like,” Tony adds. 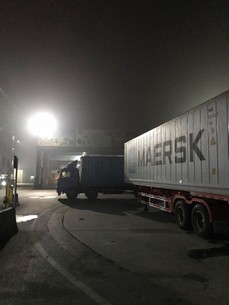 Naturally, this involves a lot of waking up early, the men explain, laughing. The containers are usually opened early in the morning, and to be on time, they leave in the dead of night to be present for this. Jaap continues: “This is essential to us. It’s how we maintain a relationship with the importer and direct buyers of our fruit. They’re very important to us because they’re the ones who actually know what’s going on every day, and they give us feedback on our fruit. They open the container with us, and we then all work together for the first day of selling on the market. Part is usually sent directly to retailers, and part is sold on the market. This way, we get a good first impression of the expected sales, and we can give the first feedback to our grower.”

Trends on fruit market China
China is a unique market with specific preferences for fruit. In China, fruit is often given as a donation or gift, so the appearance of the packaging and its size are important. The packaging of their Vietnamese dragon fruit grower, which look very colourful on the import fruit market, clearly shows FruitMax applies this in practice. “A red packaging often does well in China, because this colour is associated with a lot of positive things. Other colours often have a background or meaning in China, so it’s important to keep this in mind. We also talk to supermarket chains in Shanghai a lot, because they know and see exactly what customers are asking for and what the trends are,” Tony says. 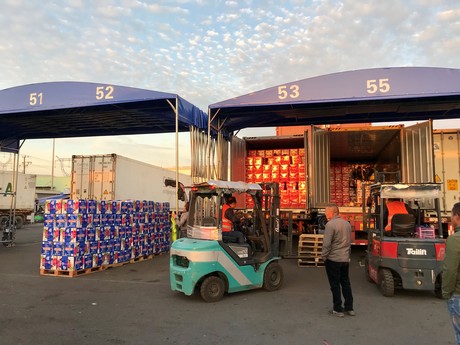 Fruit from a Vietnamese dragon fruit grower on the wholesaler’s market in Shanghai.

Location and knowledge
The port of Shanghai is an important place, where a large part of the imported fruit arrives. From the wholesaler’s market in Shanghai, this fruit is then sold further inland. FruitMax has built itself an extensive distribution network in China, which allows them to not just sell product on the market in Shanghai, but to also market this product further inland. Because FruitMax works from Shanghai, the team can be found on the local market every week. Jaap talks about their plans in China: “We’re also working hard on gaining more presence on other markets in China, and we’re talking to new sales partners both in the North and South of China.” 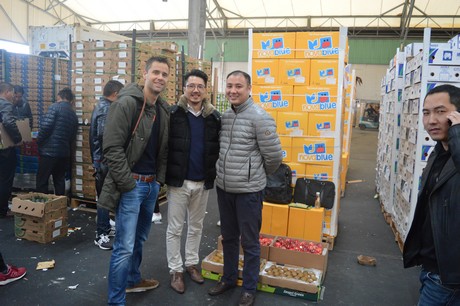 Jaap and Tony with their local partner on the wholesaler’s market.

Good marketing important
Besides FruitMax taking care of sales and export in China for foreign growers and partners, they also work on marketing to promote their fruit and its origin. “Last month, we were at the Food & Hotel fair in Shanghai, and we held a tasting for our Dutch beetroot grower. This product isn’t very well-known yet in China, and this was a good way to introduce more Chinese people to the flavour of Dutch beetroot,” Tony says. FruitMax now also has their own marketing channels and their own social media account. “We use these to tell the story of our growers in China. Chinese consumers are becoming more aware of fruit, and this is a great tool to make the product tangible, and to literally show them the origin of it.” 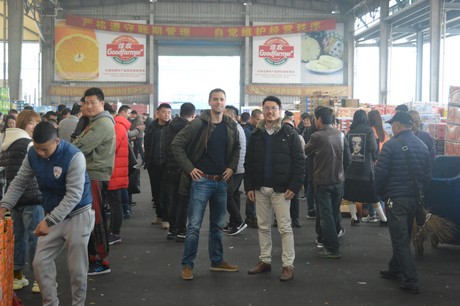 Jaap, left, and Tony, right, at the wholesaler’s market for imported fruit in Shanghai.

“We’re also working on building our own brand, which we’ll use to sell several fruit products of our growers. However, we’re now mostly working on expanding with multiple fruit varieties, and we’re in talks with various growers to see if we can work together. Like many local players in China, we’re still a young company, and we’re learning every day. Perhaps that’s why we’ve noticed we have a good connection with local players, for they are also looking for new products and sources of fruit. We learn from each other this way, and we complement each other. It’s fun to be part of this developing market, and to see up-close how the market is shaping in China. However, it’s still a struggle, we have to keep investing and staying on top of it. But step by step we’re becoming a more established name here, and we’ll continue to build a strong group of growers who want to enter the Chinese market with us,” Jaap concludes.