Originally it’s a Mediterranean vegetable that has been grown in the Mediterranean since the Middle Ages: rocket salad. Yet this vegetable, also called arugula or garden rocket, now also grows in the Netherlands. In greenhouses, but also in supermarkets increasingly often, where the narrow, dark green, indented leaves can be found on the shelves. 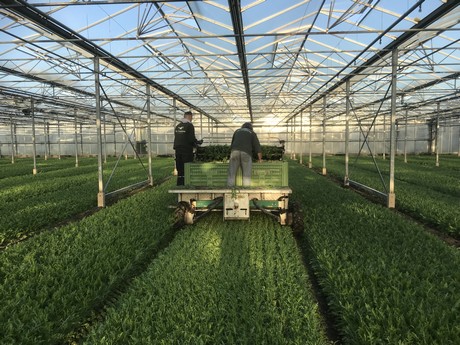 Vreugdenhil Vegetables has now grown and traded these leaves for about ten years. Merijn Vreugdenhil is responsible for both the production and the trade for Vreugdenhil Vegetables: “We’re originally an agrarian contracting firm. We supply machines and people for in the greenhouses of the Westland in the Netherlands. At one point, we converted an old radish harvesting machine into a lettuce cutter. We stared harvesting the rocket we sowed with that.” Merijn then sold this rocket salad to a packer, who sold it to catering companies and German supermarkets. “When that customer at one point asked if I couldn’t supply more rocket, we started trying to realise that.”

xtension
Vreugdenhil Vegetables now grows the mediterranean vegetable year-round at about 10 to 12 hectares in greenhouses. The majority of that comes from greenhouses from De Vries in Hoek van Holland, where radish is grown besides rocket. “We try to be on the market year-round. Some years we manage that better than other years, but with the right varieties and the right climate we manage it quite well. Our greenhouses are heated, but that’s only to keep the greenhouses free of frost in winter. Rocket is a vulnerable production. You have to sow the seeds, and these can be cut once the leaves are big enough. You need about 2.6 million seeds for one hectare. In summer, when they grow quickly, we can sometimes sow after just 23 days. In winter it sometimes takes three months before the leaves are big and ripe enough. After they’ve been cut the first time, the crop continues to grow and, if it’s not too hot, it can be harvested again.”

The majority of the rocket Merijn grows, about 90 to 95 per cent, is sent to the processing industry. A large part of this is sold even before the harvest. “It’s important to us to grow enough, but not too much. With just five pallets too many it can be difficult to sell the rocket salad. A tomato, for example, is much easier to sell. After all, we’re kind of stuck with the vegetable processor. We’re actually an extension of them.” 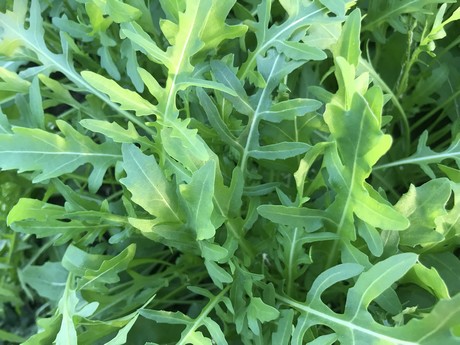 Study clubs
“You should actually be seeing it like this,” Merijn continues, “you just need mass. Just like with any other product in the agrarian sector right now. That way, you can have some left, because margins are very small. That’s what it comes down to. There’s a reason the entire sector is making an effort to scale up. Time will tell whether that trend continues, but I think we from Vreugdenhil won’t become smaller. That would be the opposite of the trends. But it all depends on who you work with. You have to continue working with them and when they grow, you have to grow with them.

The rocket of Vreugdenhil Vegetables that doesn’t immediately have a buyer isn’t sold at auction. “When we have too much, we look for other buyers, even though that’s often difficult. It can’t be sold on the free market. Usually, when we have too much, other growers also have too much. The same is true with shortages.” It’s not that Merijn is in close contact with colleague-growers. “It’s not like there are study clubs or something, I don’t actually talk to my colleagues that often. Everyone’s just doing what they do best, and that’s how it should be.” 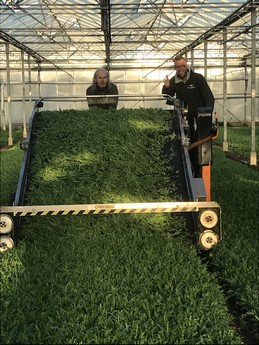 According to Merijn, the market for rocket is currently well distributed. 2018 was a ‘regular’ year. “The majority of the rocket salad is bought by a few large processors. As long as nothing changes in that, the market will be stable. Should one of these processors be lost for whatever reason, the market situation would suddenly change. A redistribution would take place then. As a grower you would then have to make sure you end up well.”

Sustainability requirements
Rocket tends to be on supermarket shelves in bags, or in mixes with various varieties of lettuce. Vreugdenhil Vegetables ships most of its rocket in wholesale packs. “We don’t work with small packaging. Most of the rocket is sent to processors in large pooled bins. In our handling hall we only have one small packing line to flow-pack the kilo-bags. These bags often also end up with processing industry or wholesaler’s markets in Germany via traders.” The reason for packaging is simple: without packaging, the product doesn’t stay fresh long enough. “Rocket put on transport in storage in pooled bins of four kilos tends to stay fresh well. It’s more difficult with smaller amounts. There’s too much air circulation between the small crates when rocket is cooled in smaller amounts, so that the rocket dries out. That doesn’t happen with flow-packs.”

Supermarkets nowadays impose ever-stricter requirements on growers. On the way to PlanetProof, previously known as Milieukeur, is becoming the new standard. Vreugdenhil Vegetables has been expecting a certification as of early October. “In two to three years everyone will have to meet these sustainability requirements. I think it’s a good thing. In the end, we’ll have to grow rocket and vegetables, but we also have to be able to live on the planet. If you can’t live, there’s no reason to grow rocket salad,” Merijn says. “The next generations should also be able to enjoy the planet. If we in the Netherlands can be frontrunners in that, we should work on that. The rest will follow.”