Plasma water: a technological imitation of lightning colliding with rain

By making use of water, air and electricity, it is possible to develop plasma water. Water that is treated with a plasma, next to solid, liquid and gas, appears as a fourth state of matter in which a gaseous substance is slightly ionized, and it has unique properties. For example, plasma water stimulates crop growth and has a hygienic cleaning effect. VitalFluid is active in the field of this plasma water and its applications. Reason enough for the authors of the SME Innovatie Top 100 to include the knowledge center in the list, of which on September 26 the final ranking (VitalFluid is at position 84) and thus the winner was announced. 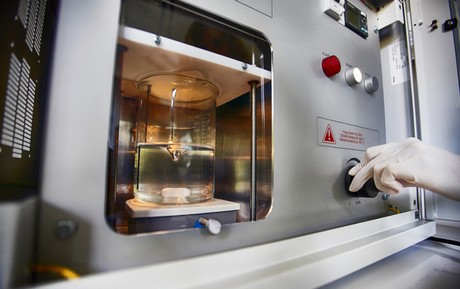 VitalFluid is a spin-off from the Eindhoven University of Technology and was founded in July 2014. However, the first tests with the innovative technology already took place in 2011, says Paul Leenders of VitalFluid. "What we are doing is actually shooting electrons in the air, like a lightning bolt. By doing so, the electrons collide with oxygen and nitrogen in the air (20% of the air consists of oxygen, 80% of nitrogen). These oxygen and nitrogen molecules are then given a charge, so that they can be dissolved in water. Actually, what we are doing is mimicking the natural phenomenon in a technological way whereby lightning takes place during a rain shower. We capture this natural phenomenon safely in a device. Nice to know is that for example 99% of all matter in the universe is in the plasma phase, just like the northern-light plasma and also the orange flames in a campfire."

No residue
"We are now looking at different applications, but at the moment our focus is mainly on agricultural applications. In collaboration with the greenhouse horticulture section of Wageningen University and Research, we have in the past already researched the possibility of using plasma water as a sustainable alternative to chemical pesticides. That appears to be possible. A very nice application, where the advantage of our water is that when you spray it on your crop, no residue will be left. In fact, first the plasma water has a hygienic cleaning effect and then nitrate-containing water is left behind and therefore leaf fertilization occurs. Our residue, in contrast to chemical products, occurs in nature and afterwards cannot be found in the environment or on the crop, in comparison with chemical agents."

Seed treatment
Because the step between laboratory applications and practice is still quite large, VitalFluid primarily focuses on seed treatment. Paul: "This concerns smaller quantities of water, a safe, controlled environment and the seed sector is already very active in R&D. So that connects well with our company. With plasma water we now focus on the hygienic cleaning of seeds while maintaining germination strength. For this, tests are now being carried out that look good. The seed industry has fewer and fewer products at its disposal, so we hope to be able to provide a solution for this. "In addition to hygienic cleaning, also other positive properties are being used from the plasma water in seed treatment. "Plasma water could, for example, also contribute positively to the germination strength and the shooting up percentage."

Artificial fertilizer
A third application is the fixation of nitrogen. "Interesting when you consider that artificial fertilizer is often still made with fossil fuels. A production process that requires a lot of energy. In every cubic meter of air there is one kilo of nitrogen, so when we could use our technology to make nitrogen in the form of nitrate, that would also be a beautiful application. However, that is still something in the long term", Paul concludes.