opened his new greenhouse Bio Gemüse Wagner last week. This happened in the presence of the Baden-Württemberg minister of agriculture and many other politicians and representatives. With 4.2 ha, the new greenhouse is the biggest organic greenhouse in Germany.
The greenhouse is located on a 6.5 ha site in Mühlingen. Benjamin Wagner invested about ten million euros in the settlement and will grow here according to the rules of organic grower organisation Naturland. Apart from the greenhouse, a new sorting location (1,700 m2) and accomodation for 40 seasonal workers are established, adding up to 23,000 m2. 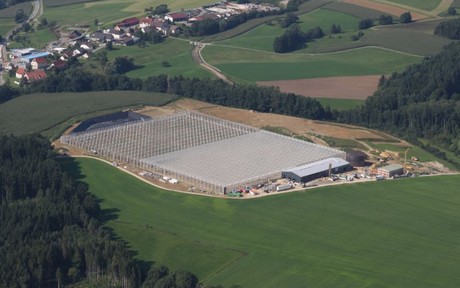 Regional cooperation
Benjamin Wagner is a member of the Reichenauer Gemüse Genossenschaft and his produce is sold by Reichenau Gemüse as well. This cooperation distinguishes itself by a strong focus on the regional market and strong connections with retail partners.
The Reichenau island in the south of Germany is the home and heart of the Reichenau Gemüse cooperation, but limited space forces the members to look to the wider region. Therefore so far three greenhouses have been erected in the near region, the Hegau pepper greenhouse being one of them, and Benjamin's project the third one. His produce will be sold exclusively by Rewe.
Organic
Benjamin Wagner has transformed a family business to an organic farm since he joined the company in 2008. In 2013 a 3 ha greenhouse was built to complement the 60 ha open field production. The construction of this new greenhouse started in May 2017. In the coming weeks, salad and radish will be harvested from the new greenhouse. Later on, also tomatoes, cucumbers and peppers will be grown here.
Residual heat
Heat is supplied by a nearby biogas installation. A 3000 m3 thermal storage tank is installed near the glasshouse, as well as a 12,000 m3 water basin. Horse manure and apple pomace are fermented, the gas is supplied as waste heat through a 700-meter long district heating pipe and collected in a heat storage tank. The required irrigation water is essentially recovered (80%) via the roof surface of the greenhouse.
Check out photos of the opening of the greenhouse here.