More hort suppliers and greenhouse builders at PMA this year

Every year in October, the North American produce industry gathers at the PMA Fresh Summit to network, scout new innovations in packaging and varieties and get updated on the latest topics related to retail, post harvest and other trade related information.
Over the last couple of years however, more and more suppliers of technical machinery, greenhouses and other hort related supplies are also attending and participating in the convention and expo. "The PMA is the place to meet some of North America's largest greenhouse produce companies", said Ton Versteeg of the Bom Group.
Bom Group is a Dutch manufacturer of high end greenhouses and supplies turnkey projects all over the world. "A big part of our activities take place in the North America", said Bom Group's export manager Ton Versteeg. "They are the result of the increasing demand for locally grown greenhouse produce which occurs nationwide." 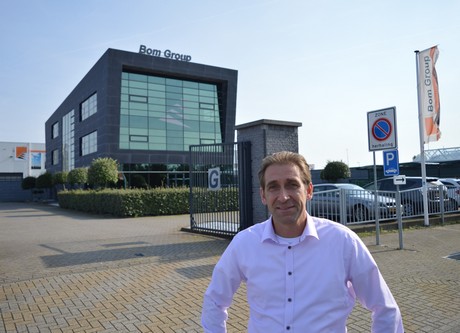 Bom Group's Ton Versteeg at their headquarters in Hoek van Holland.
Therefore Bom Group will once again be participating in the PMA Fresh Summit. "It is the third time that we will be exhibiting at PMA, an event that brings together the majority of the U.S., Mexican and Canadian greenhouse vegetable growers. Those with expansion plans can meet us at the convention to get informed about the latest possibilities in the field of greenhouse technology and turnkey project realization."
Versteeg explained that the Bom Group has completed several large scale greenhouse projects in North America lately. "We build a number of projects in the U.S., but also in Canada. From Capsicums to tomatoes, but more recently also for cultivators of medical cannabis. While this fairly new industry brings us new work, we still are also very busy for growers of fresh produce, both organic and conventional." Furthermore, Versteeg notices a lot of interest in large scale projects. "Currently there is a lot of interest to grow strawberries and other soft fruit in greenhouses too."
Bom Group will be exhibiting at the PMA Fresh Summit October 19-21, New Orleans, at booth number 5841
For more information:
Bom Group