Geert Leffers to scale up project with two more phases:

After a few major setbacks and financial backlashes, the 5 hectare greenhouse project of Geert Leffers in Daxing, China is about to be finalized. The Dutchman informed us that the first tomato transplants will arrive in a few more weeks and that he hopes to pick the first crops just before Chinese New Year.

Since 2014 we have been sharing updates from Leffers' greenhouse project. He is building a large scale Venlo project for a group of Chinese investors. Leffers is also partly shareholder of the project and is responsible for the complete construction and supervision. With the help of mostly local people, he built the entire project from scratch, experiencing setbacks and delays as a result of financial and corporate setbacks. Investors pulled out and new came in, but Leffers is now finally about to complete the first phase. 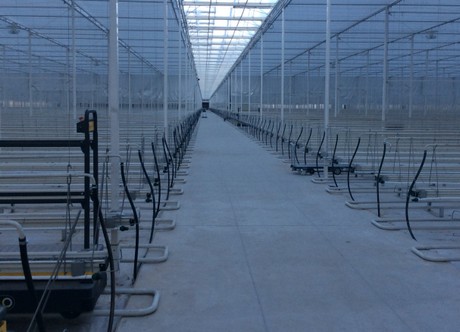 Leffers informed us that he is installing the final drip irrigation and the substrate will come in this week. His Bogaerts Powerbee transport system has arrived as well as several other crop work and pipe rail trolleys. The seeds for his first crops have been sowed and grafted at Rijk Zwaan in Qingdao.

The first 5 hectare of Beijing Dongzheng Agriculture Co. will be dedicated to the cultivation of several tomato varieties. Leffers will be growing several beef, cluster and cherry tomato varieties like Rijk Zwaan's Tastery and Capricia. Next to this he will grow Enza Zaden's Kanavaro, a beef tomato variety that many fresh-cut companies have shown interest in. Dutch fresh produce trader Levarht will be responsible for the marketing of the produce throughout China.

As soon as the first crops have been picked, Leffers will continue with the expansion of the project. He said that he wants to start with the second 5 hectare phase after the winter in February-March. When this phase is completed he will break ground for phase three, a six hectare greenhouse with supplemental lighting in order to maintain a steady production year round. Leffers said that the financing for these phases have been completed and that the projects are only waiting for permission from the government.

The current greenhouse was built with help from greenhouse builder V&V and was manufactured by Yuefu Greenhouse Equipment Shanghai Co. Ltd. Leffers said that phase two and three will be built by V&V again, but that he is no longer buying materials at Yuefu as he has a financial dispute with this greenhouse manufacturer.

"This company still owes us some 300,000 USD due to clearance problems, VAT and duties we had to pay to customs for them. The owner is an Englishman, Ian Faulkner, and said that the company had a cash flow problem and asked us to lend them the money. Ever since they are not responding to us anymore and he probably has left China with our money. I would like to warn other companies about this scam business. It caused a big delay to our project and cost us a lot of money."