A year after introducing tomato variety Merlice in Mexico, Monsanto has high hopes for its performance there. That's due to the particular characteristics of the variety that make it well-suited to the growing climate Mexico's growers deal with.

“We expect a lot from Merlice because it's a stronger variety, reacts well under harsh conditions and does well in the sun,” said Thijs Peekstok of Monsanto, who is part of the team which markets its high tech greenhouse varieties under De Ruiter branch besides the other branch for low tech and open field, Seminis. The specific benefits of the variety, according to Peekstok, include its resistance to the powdery mildew disease that afflicts other tomato varieties. Additionally, the rootstock used with the variety is exceptionally strong.

“Merlice behaves extremely well with a strong rootstock, like the new DR0141TX, which has more power than Maxifort, but is more balanced, so it's easier for growers to get a good, balanced crop from the start,” said Peekstok. “The first trusses have nicer fruit that's easier to control, so people are excited about the combination between Merlice and this rootstock.” For those reasons, Peekstok thinks adoption of the variety be good in Mexico.

Thijs Peekstok, Eduardo Salcedo and Damian Solomon from Monsanto at the De Ruiter trials at the Expo Agroalimentario Guanajuato 2013.. Merlice was looking very strong at the show.

“De Ruiter's market share in Mexico for tomatoes on the vine is 90 percent,” said Eduardo Salcedo, sales lead for de Ruiter Mexico. “That's spread among Komeett, DRW7513 and Grandela, but I think that all of that will be Merlice in about two years.” De Ruiter has over 200 hectares in Mexico dedicated to tomatoes on the vine. The reason, Salcedo thinks, that most of that will soon grow Merlice tomatoes is because, like Peekstok, the climate favours the variety and Mexican growers can adapt new varieties quickly. 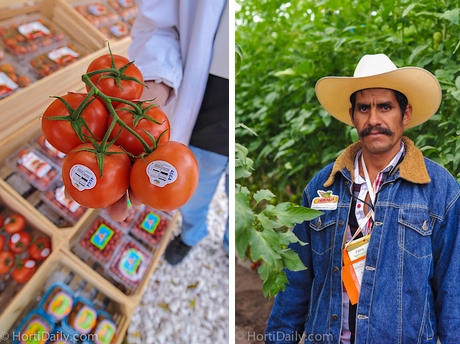 On the left: Merlice spotted at Mastronardi's booth at the Expo Agroalimentaria. On the right a Mexican grower in the Seminis demo greenhouse.

“The Mexican greenhouse industry is very comparable with the level in the rest of North America and The Netherlands,” added De Ruiter's Damian Solomon. “The gap has been closed over the last five years because Mexican growers have learned how to grow and they've brought in people with the right technical experience, so the products they can produce are now on par with everyone else.” 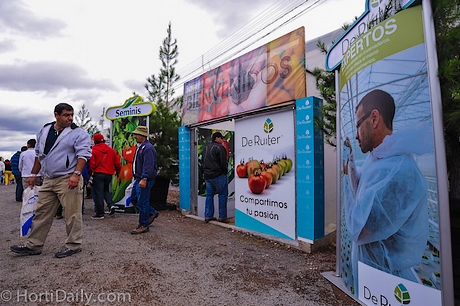 “Next to this, we are introducing a new beefsteak variety, Foronti, and we see big interest for this variety because of the high level of powdery mildew resistance combined with a very high yield potential,” added Peekstock. You can easily say that Mexican growers are more willing to adapt new varieties, they are eager to learn more and are keeping their eyes and ears open at all times. And of course, as a breeding company we are pleased with this progressive approach.”