Local growers provide Tommies cultivation in Mexico and US

Last year, 'Tommies' won the PMA Impact Award which has not been bad for business for the Dutch snack vegetable grower. Meanwhile Tommies are now available at Walmart stores and there has been demand to fill the various DC's nationwide. "The biggest challenge we face is ensuring that the volume meets our high standard of quality and taste. We wish to expand the brand but also guard it," explained Jos van Mil. 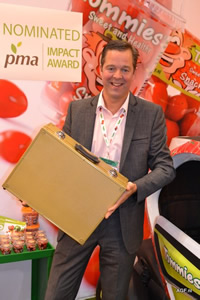 During the PMA in New Orleans last weekend, growers of Tommies brought along some of their new products in a golden case. "You might see us back next year as a nomination in the Innovation Award. Reactions have been positive. The snack concept is still in its infancy in America and the Tommies are here at just the right moment for the market. Competition is not as big as in The Netherlands, but even here you have to show that you continue to innovate because there are big players in America who also play on the snack market. You need to continually prove yourself on the shop floor which is also a reason Walmart wish to continue with us," said the grower.

"A snack concept, such as that we have developed for the market in cooperation with The Greenery, you would not have seen a couple of years ago. In the USA we also have the possibility to sell the vegetable snack with the Tommies clown, whereas in the United Kingdom there is no possibility for own labels and only private labels are used. In Germany there is still that possibility. With Tommies, and Fred & Ed we have the possibility to build on our reputation. We had developed the Disney concept with three different exporters but for some reason or another children did not connect vegetables and fruit with Disney. With our clown we have seen that we can position our items as real snack product for children." 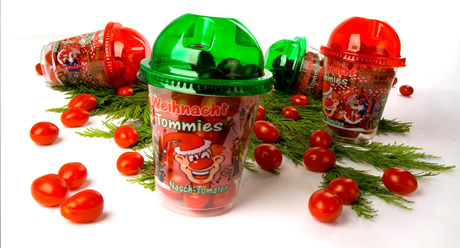 Until a few years ago, Greenco growers exported their product from The Netherlands to the United States. Two years ago different growers in Mexico and the US farmed on a contract basis for Tommies. "People regularly go from Greenco to Mexico to inspect the taste and quality of the Tommies grown. In Mexico, growing for a Dutch grower is also a new phenomenon, but with the high tech greenhouses they have the instruments to make great music, as long as you have a great conductor. However we are sitting on top. We acknowledge that we have a brand which we have built up, but in a couple of weeks can be devalued." 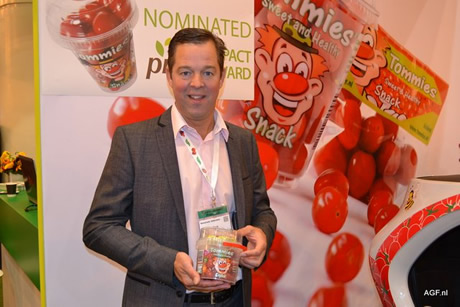 "The good climate in the right parts of Mexico ensure good temperatures and lots of light. These conditions are great for tomato flavour and we can grow, year round, a tomato with a brix of 8-10. The light intensity even in a Mexican winter is better than the summer months in The Netherlands, and that is great for the flavour." Jos continued "in the US it is also increasingly important to grow locally so that is also a reason to work with American growers. Mexican products stay in Mexican America, just like in The Netherlands we have Spanish product. As long as your product tastes great, the country of origin is less important."