A Cornell researcher has completed a decades-long program to develop new varieties of tomatoes that naturally resist pests and limit the transfer of viral disease by insects.

Martha Mutschler-Chu, a plant breeder and geneticist who leads the program, recently deposited an initial set of insect-resistant tomato research lines in the U.S. Department of Agriculture germplasm system and the Tomato Genetics Resource Center at the University of California-Davis, which will be available for anyone to access the plants for research.

This spring, Mutschler-Chu will complete the development of a new set of 20 elite lines, which will then be made available to any interested seed company, which may breed the pest-resistant traits into commercial varieties. Breeding new varieties could take seed companies up to five years before they start selling new insect-resistant varieties.

For growers, these benefits will offer less crop loss and fruit damage while also eliminating or reducing pesticide use and protecting the environment.

Pest resistance in these tomatoes was adapted from a wild tomato native to Peru, Solanum pennellii. The Andean tomato has little hairs called trichomes that excrete droplets of sugar compounds called acylsugars, which repulse insects. In this way, the plants safely and naturally deter a wide variety of insects, preventing them from feeding, eating leaves and transferring viruses, or laying eggs, where larvae might damage plants. 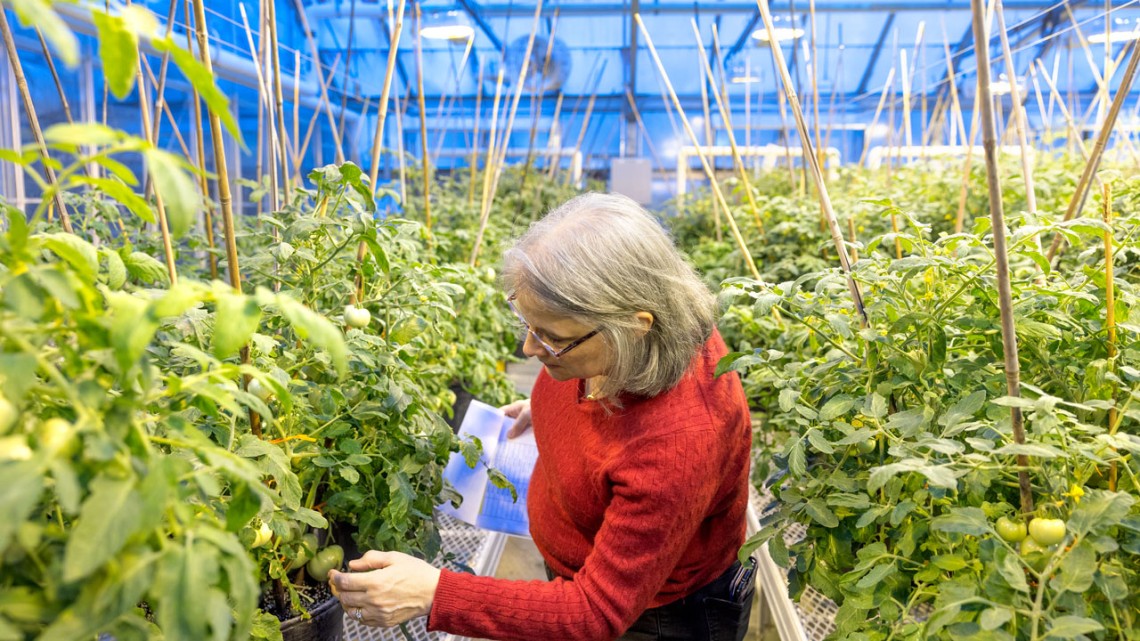 “For best virus control, I’ve suggested that seed companies use a dual-layer approach: create hybrids with both the acylsugar trait and standard virus resistance genes,” Mutschler-Chu said. If insects manage to infect a plant with a virus in spite of the acylsugars, virus-resistant genes provide additional protection.

“It’s a system that will protect the virus resistance genes utility because if there’s less virus getting into a plant, the probability that the virus will have a random mutation that generates a strain that overcomes the resistance also goes down,” Mutschler-Chu said. Similarly, since acylsugars are non-toxic and don’t kill insects, there is less selection pressure for insects themselves to become tolerant, so they adapt more slowly to the repellant.

The new elite lines, soon to be available to seed companies, have had most of the wild genes from S. pennellii that promote agronomically undesirable traits removed from their genomes. Mutschler-Chu retained critical acylsugar genes while removing many other wild genes that caused negative traits such as excess branches, small fruit, and an off-flavor. While initial research lines contained about 12% wild S. pennellii DNA, the newest lines are down to approximately 2.5% wild DNA.

In broader terms, the work practically demonstrates a process for incorporating a valuable trait based on a safe, natural compound controlled by numerous genes and that is effective against viruses and multiple pests, a strategy that could also benefit other crops, Mutschler-Chu said.

While the elite lines will be released non-exclusively for any seed company to breed traits into their commercial varieties, they will need to apply for a license with Cornell’s Center for Technology Licensing before they can sell seeds.

The work was funded by the USDA’s Agriculture and Food Research Initiative.