After celebrating their 10th anniversary, Fenix enters their second decade of activity with the publication of the new catalog for 2023.

2022 has been a very intense year for the Catania -based seed company. In addition to consolidating and maintaining varieties that are now recognized and renowned in various markets, such as the grape tomato Miele, the entire rootstock range, and the hybrid basil range, the company also worked on developing new hybrids that can be increasingly efficient in responding to the different grower needs.

Resistant basils and short-day onion
Among the protagonists of this varietal range, there is one crop Fenix has dedicated itself to since the very first years of activity and which keeps growing in various markets both in Europe and overseas, their hybrid basil resistant to Fusarium and Downy Mildew. Their now decade-long collaboration with Israeli research centers continues to produce exciting varieties even for market niches that are seeing slight but steady growth, such as red basil. These are all present in the catalog as well and include new varieties such as the Prospera Red F1, which combines the qualitative characteristics of aroma, color, and flavor and the genetic resistances that have marked the success of Prospera F1 with an attractive, bright purple color. 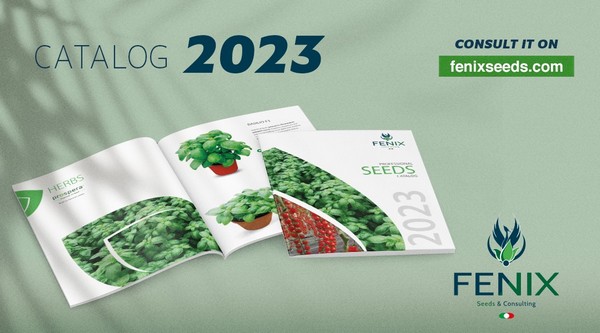 It is also important to note that during the visit to the Israeli research centers, some important players in Italian basil production and supply chain had the opportunity to see varieties in development that will reach the markets in the coming seasons with their own eyes—characterized by important implementations, especially from the point of view of the level of genetic resistances.

We also observed novelties in the latest species that arrived in the catalog: short-day onions. The catalog also welcomed three new red hybrids that were positively evaluated by those who had the chance to try them: FX 2051 F1, FX 2052 F1, and FX 2053 F1. These varieties have the same characteristics as the yellow hybrids, including snow-white, thick, juicy, and very sweet bulb coats, robust and dark-green foliage, and adaptability to both fresh consumption and storage. As with other crops, several hybrids have been selected to meet the different needs of farmers and for different transplanting times, from the earliest ones for the fresh market to the later ones to ensure significantly longer shelf life.

Next is the mini-round watermelon type, the Crimson FX 2014 F1, characterized by medium vigor, uniform size, and high sugar content.

Tomatoes and rootstocks, an increasingly complete and complementary range
The tomato section, which has always been a mainstay of the Sicilian company, presents some interesting new products that complement the rootstock range, another of Fenix's flagship products. In the mini plum/grape tomato segment, two new products are confirmed: DUCI F1 (ex FX 1597 F1), the protagonist of one of the most important and massive first spreads of datterino in the southeastern Sicily area. The variety faithfully follows in the footsteps of the above-mentioned Miele F1, allowing a lengthening of the transplanting period without losing the characteristics of sweetness and resistance to splitting.

NETTARINO F1 (ex FX 1628 F1), a sweet summer mini-plum with a smaller size, interesting for both domestic niches and foreign markets, flanks the highly successful KENDALL F1 that remains the reference for growers of the datterino type during the spring-summer cycles. Then there is the colorful GLITTER F1, with its vigorous plant, elegant vine, and high brix degree, which many farmers have already had the opportunity to appreciate and reconfirm. As far as the other types are concerned, the seed company is presenting the elongated FX 1662 F1 on the market in wide distribution, which is finding its place in the segment thanks to the high vigor of the plant and high yield due to the specific weight of the fruit (150 gr.). The variety also has a tolerance to blossom end rot, as well as numerous genetic resistances, including FOL2 - Fusarium 3 and TSWV - Tomato Spotted Wilt Virus.

At the end of the catalog, readers can find the rootstocks for professional horticultural plants, the first range brought to the market by Fenix and which has always played a fundamental role in both research and sales of the company. Rootstocks improve the plant's productive capacity and fruit quality. Grafting is now an established practice in the horticultural sector to tackle soil and root pathogens, supporting the development and vigor of the plant.

Fenix's range of rootstocks is complete, but at the same time, it is constantly evolving. The hybrids are adapted to different soil types for different species and types of vegetable crops.