IFA President Tim Cullinan has said that while Irish farmers will work to reduce emissions and address climate challenges, they will not stand for a reduction in their incomes or the destruction of their livelihoods and way of life.

Speaking today at IFA’s Farming & Climate Summit in Thomond Park, the IFA President said, “Imports of food from Brazil into the European Union increased by 47% in 2022. The reality is that reducing food production in Ireland will lead to ‘carbon leakage’ as food will be produced in other countries at a higher environmental cost. Meanwhile, we risk devastating our own sector with significant economic and social consequences.” 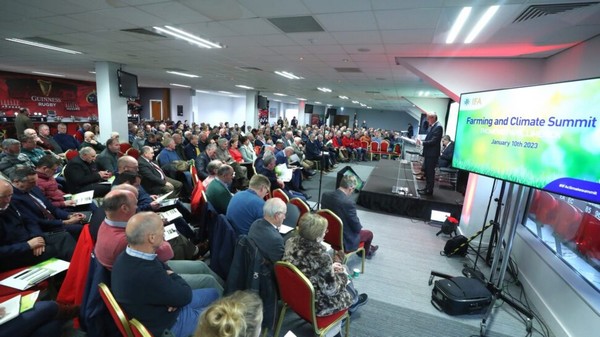 The IFA President said the Government was less than honest in confronting the ‘carbon leakage’ issue. “It’s there in the legislation, but it’s being ignored,” he said.

Ciaran Fitzgerald, Food Economist, quantified the economic impact with the stark warning that every 1% reduction in Agricultural Output will wipe €240m from the Irish economy.

“Existing methodologies and portrayals grossly understate the economic contribution of the agri-food sector. Economic misrepresentation promotes the notion of low contribution and easy replacement. This has to change both within the industry and political circles,” he said.

“The current approach completely ignores and overlooks the regional impact and actual expenditures made locally, which in the case of agriculture is significant,” he said.

In his address, Tadhg Buckley, IFA Director of Policy/Chief Economist, outlined the range of national & EU policies facing Irish agriculture in the years ahead, each with inherent objectives of inhibiting food production rather than promoting it.

“You’re talking c. 8% of total land area (excl. rough grazing and commonage) potentially lost to food production or undergoing a change in land use – 115,000ha gone for anaerobic digestion; 68,500ha for increased afforestation rates etc. Land is already a scarce resource, and the market in recent times has rocketed in anticipation of what is to come down the line. Policy makers need to tread carefully and fully understand the wider ramifications of their policies,” he said.

The Minister for Agriculture, Charlie McConalogue, gave the keynote address in the afternoon.

This was followed by a discussion on future policy challenges for Irish farmers and the wider agri-food industry with Frank O’Mara, Director of Teagasc, Thia Hennessy, Head of the Department of Food Business and Development, UCC, and Paul O’Brien, Chair of IFA’s Environment & Rural Affairs Committee.

Tim Cullinan said the event aims to start closing some of the huge information gaps.

“IFA recognizes the climate challenge. Our members are keen to play their part. However, the Minister must be in no doubt that it cannot be at the expense of their livelihoods,” he said.