Everyone is talking about the brown rugose virus. After all, there are only very limited solutions for that, and it can be particularly devastating for a grower's bottom line. This doesn't mean that other nasty pathogens are kept at bay. There is one in particular for which no solution has been found yet. That is the Clavibacter michiganensis. "The main symptoms are the wilting of the plants, black spots on the fruits, and on the stems of the plants there is the development of canker," says Eleni Koseoglou, who earned her Ph.D. with her dissertation on how to develop Clavibacter-resistant tomato varieties. "Leaves wilt and die. Overall, the Clavibacter is very destructive."

What's up with that?
But why we don't hear much about that? "The Clavibacter is actually present in many more countries than the ToBRFV, for instance," Dr. Jan van der Wolf, bacteriology researcher at WUR, who supervised Eleni's PhD research. "But the number of incidents is rather low. For instance, in the Netherlands, you get around 1 to 5 incidents per year, and cleaning the glasshouse properly would stop the outbreak." This isn't, however, the case for growers from other countries. "In some countries, the pathogen is endemic, like in Greece, Russia, Switzerland, and Mexico, for instance. Since this is a seed-borne pathogen, growers in those regions try to work with the cleanest seeds."

If a grower has to empty the greenhouse and clean it properly when a Clavibacter outbreak happens, it goes without saying that the economic repercussions can be quite significant. In countries where the pathogen is endemic, the risks for reintroductions are high. "The thing is that this pathogen can survive in crop waste and debris," he points out. "So if you don't clean properly, you get a new infection. Those growers who don't regard hygiene have a high risk of Clavibacter outbreaks." 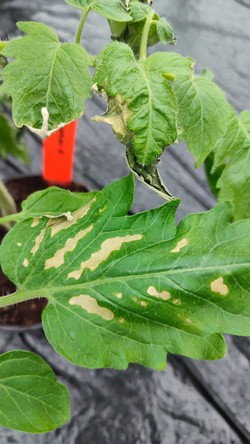 Tomatoes are the main host of this pathogen, both in greenhouses and in the open field. That's why Eleni has researched how to make Clavibacter-resistant tomato varieties. The method she deployed, however, sounds as counterintuitive as it is effective. "Generally speaking, when looking for a resistance gene, you scan wild species that are related to tomatoes," she explains. "With genetic analysis and mapping, they try to identify the genes that are responsible for that resistance. Then, they implement that gene in the crop in question, which would then be able to recognize one molecule from the pathogen, thus effectively stopping it. For the Clavibacter, however, we took a different approach."

That approach has to do with plant susceptibility genes. "Bluntly put, a gene might be manipulated by a  specific pathogen, which is what causes the infection. These genes are preserved in different plant species, and there are studies on how these genes can be deployed in different crops to see if said genes are effective in countering a pathogen. Another way to identify susceptibility genes is to look at gene expression since pathogen can change their expression during infection. 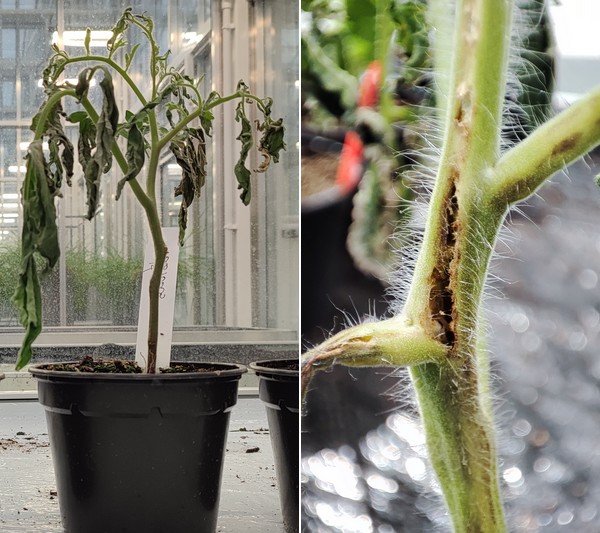 Defense up
When the 'guilty' gene is found, there are two options. "We can silence it, or we can outright knock it out," she remarks. Both of these methods, however, may have a trade-off." The susceptibility genes often have an important function within the plant, "When silencing or knocking out the gene, you may achieve the desired resistance, but it may have some repercussions. "Plants may become dwarf, or maybe the yield is not good. For the genes we identified, we did see these side effects. In fact, plants were rather small. But we also saw that, depending on how we tackled the susceptibility gene, the side effects varied. For instance, when only silencing the genes, there was still some gene expression going on. So, you might get the resistance you wanted, but without the adverse side effects that a full knock-out might have."

"In a next project, we will continue our research. We will identify effector proteins, which are small proteins that pathogens create to change the physiology of the cell and attack it. For some of these proteins, it is known that they can target susceptibility genes to cause susceptibility. So, we can identify which plant genes are affected by this effector protein." 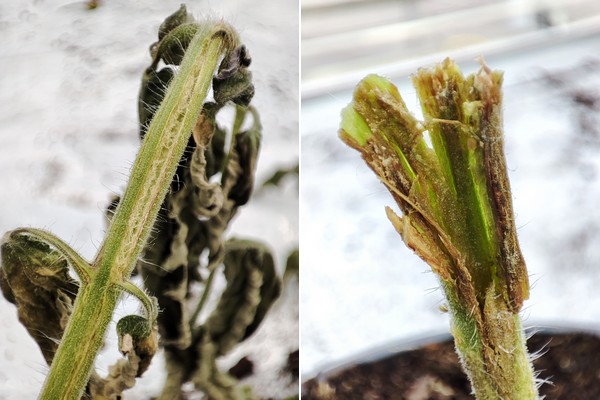 It's a different story when it comes to knocking the gene out. "That is what causes side effects the most." And this is where Eleni's research work plays a crucial role. "The research on breeding Clavibacter-resistance tomato varieties is ongoing, with the support from some seed companies. So for the new project, what we are going to do is to identify S genes that are targeted by effector proteins. A lot of times, proteins produced by S genes physically interact with effector proteins. We believe that by finding the sites of interaction of the proteins, we can introduce mutations. This way, the interaction between the effector and the plant protein is lost, but the function of the protein in the plant remains the same. Thus, there are no side effects for the plants."