Huelva is a soft fruit-growing region in Spain. There, the strawberry season is about to start; the first blueberries are still some way off, while the raspberry season has been going for a few weeks already. Jan van Bergeijk, responsible for raspberry sales within the Plusberries group, gives an update on the season. 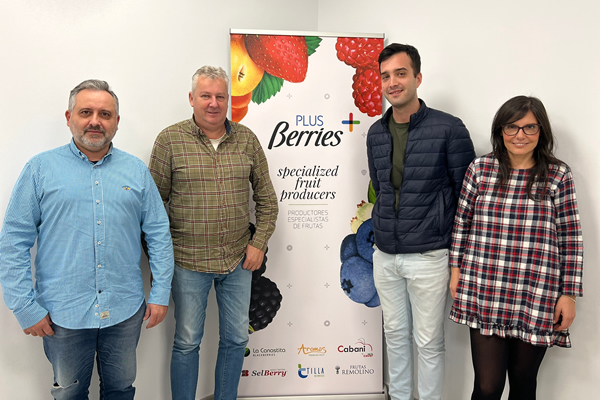 Jan van Bergeijk (second from the left) with the Plusberries raspberry team.

"For now, the Spanish raspberry season's a bit difficult. There's reasonable supply on the market, but demand seems to be slightly lower than other years," says Jan. He chalks up that lower demand to the economic situation. "The recession affects everyone, and soft fruit is perhaps less of a basic item than potatoes or onions. Also, I think the difference between grower and supermarket prices are sometimes too high to sell large volumes."

"So far, yields have been good and cultivation as expected; there have simply been a few too many raspberries on the market. In November, prices were under considerable pressure but starting in mid-December, the market picked up slightly. Now, we just have to wait to see what it does after New Year's," Jan continues.

"When temperatures fall a bit, and productions decline a bit, I expect sales to be somewhat easier." When asked if they still benefit in Spain from Northwest Europe's lower-lit cultivation area, Jan answers, "If we do, we should start noticing that in the next few months."

According to him, this season's raspberry acreages in Spain and Portugal have remained virtually unchanged. There has, however, been a sharp increase in Moroccan cultivation in recent years. "But for next season, I don't expect much more in Morocco. Delays at the European border have been quite problematic. And it's soft fruit, so always a fragile item," Jan concludes.