For many growers, glass has traditionally been the default choice. Yet, with today's gas prices, growers are looking for alternatives to reduce heat losses within the greenhouse. "Energy saving starts at this point," says Jelle Boeters from Filclair Nederland BV. Research done on behalf of the company shows that using foil can reduce energy demand by up to 28%. "Foil is regarded as having a lower light transmission than glass. However, the structure of a foil greenhouse is much slimmer, so more light reaches the canopy." 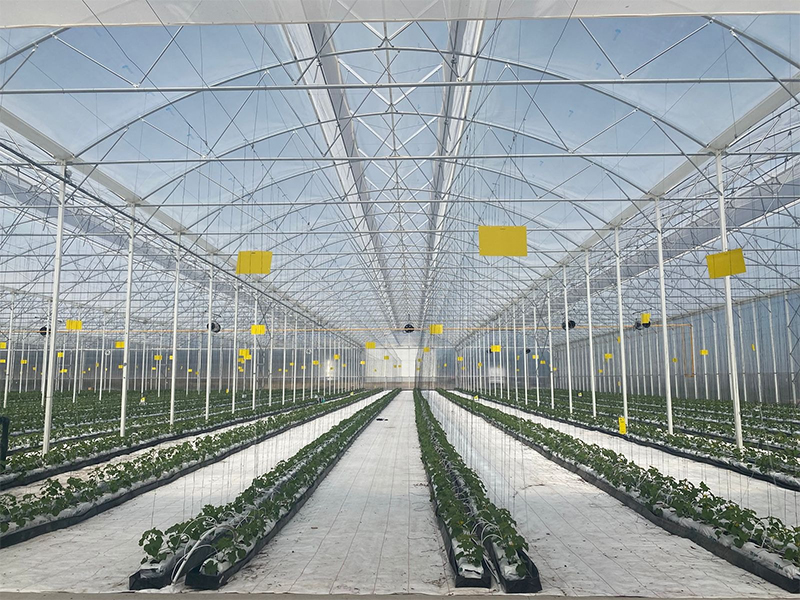 "Greenhouses are amazing sunlight collectors, but as soon as there is no radiation, the accumulated heat is exhausted very quickly. We've seen foil greenhouses having better insulation, thus limiting heat loss, but we wanted to know exactly how much that would be and from what point on it would be interesting for growers."

So, the Hortinergy software was used to compare a glass greenhouse with a foil greenhouse. That computer program simulates the indoor climate and energy consumption of a greenhouse project. The thermal coefficients of the materials, as to the international norm of greenhouses, were used. Four types of greenhouses were compared: single glass without a screen, single glass with one screen, double inflated folio without a screen, and double inflated folio with one screen. With all this information, the thermal energy needs for the greenhouses were calculated over a complete tomato cycle, from December 1st till October 31st. 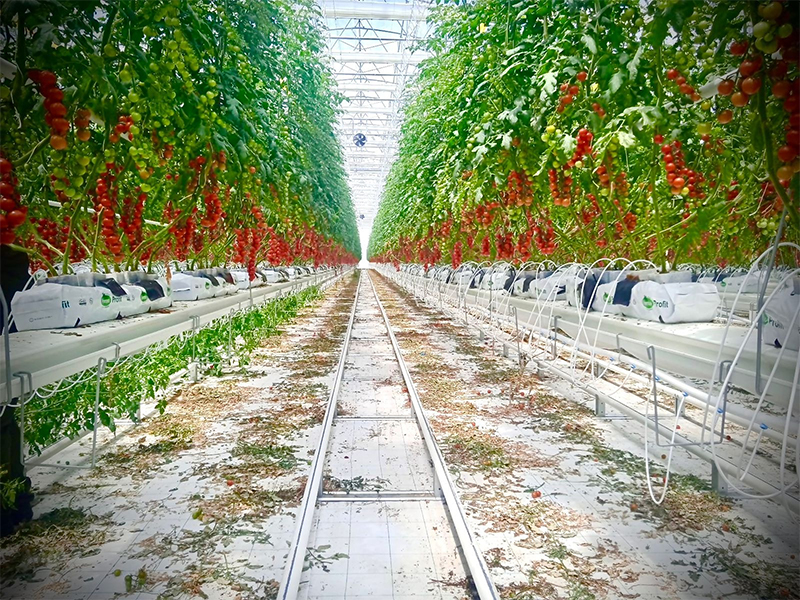 The final numbers speak for themselves. The Hortinergy simulation shows how the single glass greenhouse without a screen would use 381 kWh/m2 per year to heat the greenhouse at 20 degrees Celsius during the day and 16 degrees Celsius during the night. With a screen, this number would go down to 290 kWh/m2. A double-inflated folio greenhouse would require only 252 kWh/m2 to reach the same temperature levels throughout the year. Adding a screen to it would result in an energy need of 207 kWh/m2. 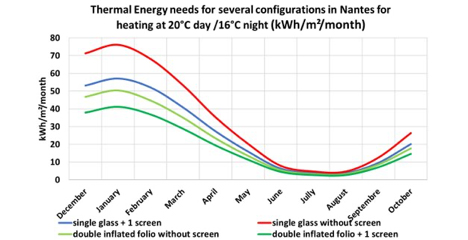 Light transmission
"Glass is also the standard choice for growers as the light transmission of glass is higher than foil," Jelle continues. "This is true: if you compare two greenhouses with the same shape and structure, the double plastic cover would let through less light. However, since foil weighs less than glass, the complete structure is much slimmer with the same loads." Comparing a Venlo 2x4 greenhouse with the Filclair AERO+ shape, which has a much lower ridge than the competition in the Hortinergy software shows, there's 17% more light measured on the crop in the AERO+ infrastructure. "A thinner greenhouse structure means less shadow compared to the larger structures of glass greenhouses." 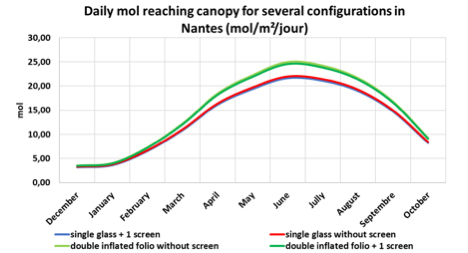 ​Replacing foil
The foil on the greenhouses needs to be replaced every three years. "This is also why some growers prefer glass greenhouses: they don't want the hassle of changing the foil. Others though prefer it, as they always keep an eye on the latest foil tech in the market. By using double foil and a special patented structure, our greenhouse is more airtight and insect-proof than our competitors. With the double-layer installation, growers can also choose many configurations based on their needs for a diffuse and clear layer. Or they can opt for a cooling foil to disperse the light so that the temperature goes down during the summer. Also, coatings can be applied to foil greenhouses. 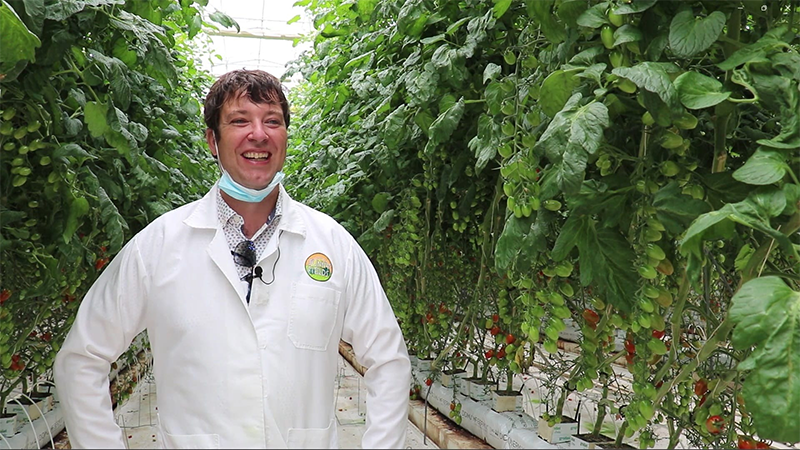 Additional spreadout
Over the last months, the company has seen growers in regions traditionally filled with glass greenhouses look for foil options. "Norway, for example," Jelle says. "In the past, foil greenhouses were regarded as only suitable for southern regions, but the current foil structures are more similar to glass structures." Also, the initial investment in our structure is more beneficial. "But that's not where you'll find the greatest benefits," Jelle concludes. "That truly is the 25 percent lower heating demand."