In this month's air freight blog, we will focus on the declining trend of air freight rates across the top two global volume corridors: East Asia to the US and East Asia to Europe, as the air cargo peak season is called off.

East Asia to the US 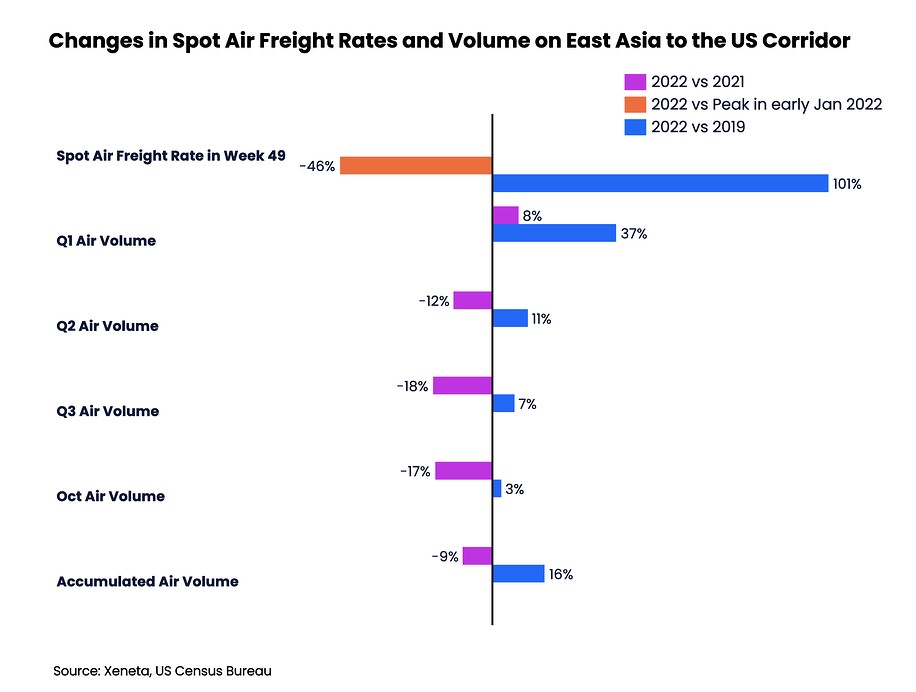 The falling air freight rates are attributed to the decline in air cargo demand. US Census reports that air cargo volume from East Asia to the US has been trending downward since Q2 this year, with volume in the first ten months down 9% year-on-year compared to the air cargo peak year of 2021.

The declining volume on this corridor is mainly on exports from mainland China. Due to China's persistent Covid-19 lockdowns and US's high inflation rate, the outbound mainland China market registered a double-digit volume decline (-12%) between January and October compared to last year. And the drop seems to have gained momentum recently. In October this year, the air cargo volume was down 21% compared to October 2021.

Meanwhile, the rest of East Asia (including Hong Kong, Taiwan, Japan, and South Korea) to the US had a less pronounced air cargo volume decline than last year's levels, starting from minus 4% in Q2 and reaching minus 8% in October.

Put into a historical perspective, the spot air freight rate from East Asia to the US in early December hit a two-year low. But remained 101% above the same period in 2019.

On the one hand, the elevated air freight rate is caused by the slow reopening of the East Asian market. This has caused more affordable passenger belly capacity to remain below pre-pandemic levels. But, air cargo demand has been growing above 2019 levels. US Census reports that by the end of October, accumulated air volumes have increased 16% compared to 2019 (and +3% in October only).

However, it is worth noting that the rest of the East Asian market contributed to most of this air cargo growth, which is up a considerable 39% from the pre-Covid level. Outbound mainland China only registered an accumulated volume growth of 6% for the same period, as its volume growth has fallen since July. 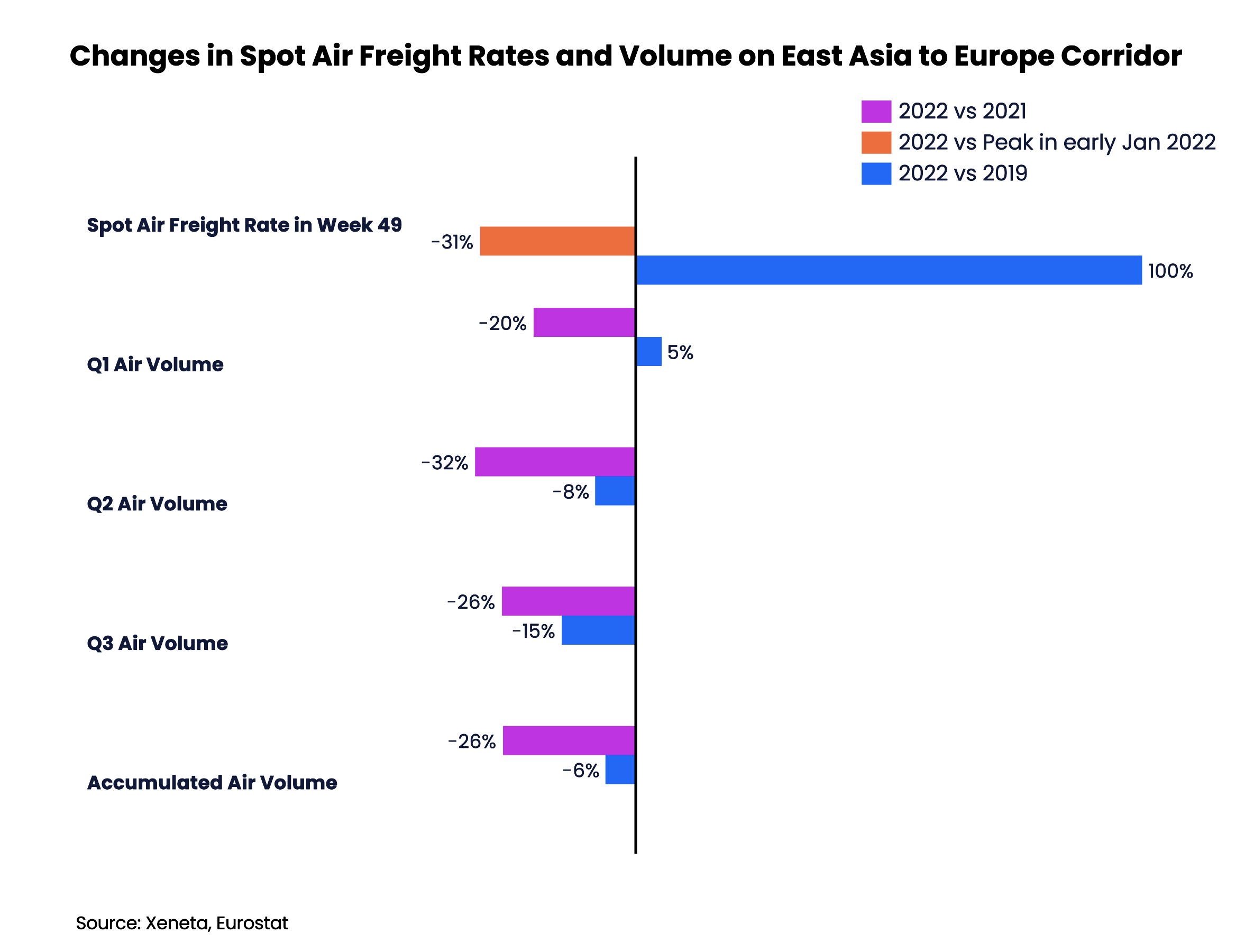 Spot air freight rate from East Asia to Europe stood at USD 5.76 per kg in the week ending on December 11, a level last seen by the end of September 2021. It declined only 31% from its peak in the week ending on January 2, 2022, and it remained double compared to the 2019 price over the same week. 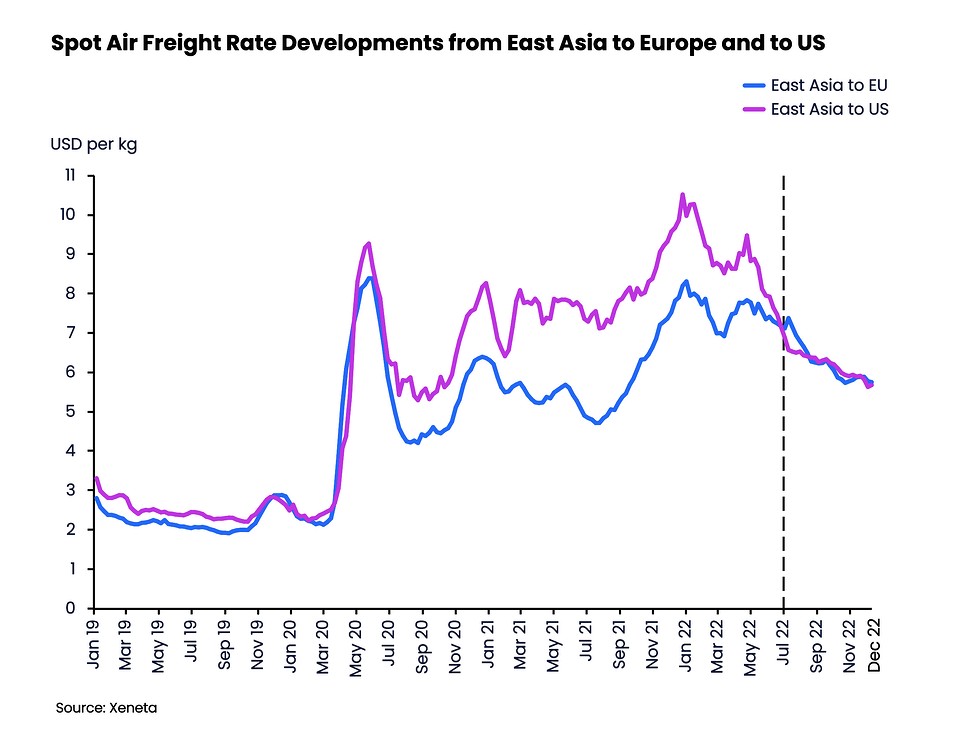 In accordance with this, the spot air freight rate for the inbound US market has been falling. It has been below or at a similar level as the inbound Europe rate since early July this year, which normally is the other way around. In the first three quarters of this year, air cargo volume in East Asia to the European Union shows an eye-watering 26% accumulated decline compared to last year and a 6% fall from the pre-pandemic level (source: Eurostat). It dropped one-quarter ahead of the inbound US market and in a more drastic manner.

Additionally, the hesitation in air freight rate decline on the inbound Europe corridor compared to the inbound US can be attributed to the knock-on effects of the Russia-Ukraine war, which directly affects the EU much more than the US.

For instance, increased operating costs due to the closure of Russian airspace and high energy costs mitigate the effects of the severe decline in air cargo volume. At the subregional level, there are uneven air freight rate declines between mainland China and the rest of East Asia origins.