Tomato prices rose for the second week in a row on the VBT clocks last week. The increase suits the time of year. Traditionally, prices rise in September. Middle prices in week 37 are well above the five-year average. The same remains true for cucumber. 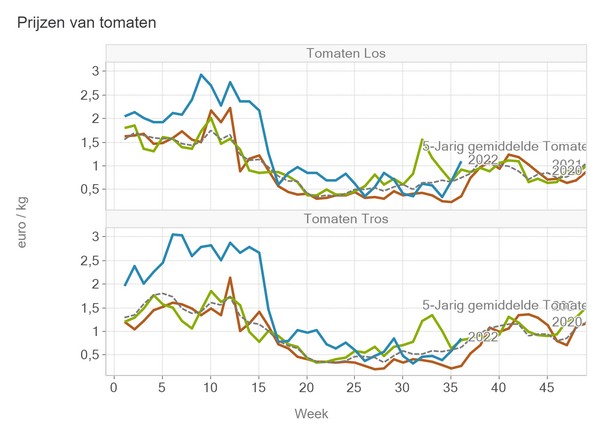 Average tomato prices up to week 36. In week 37, the average price further exceeds the five-year average.

Among peppers, the high price for yellow peppers is particularly striking. A kilo of yellow peppers yields more than double the price of a kilo of green or red peppers. Yellow comes out at just over 2.07 euro over week 37. Red at 97 euro cents and green at 99 euro cents.

The aubergine price has not continued to rise for the first time in weeks but remains at a high price level of 2.25 euro. The price for green courgettes does continue to rise, to 63.5 euro cents each.

The above chart comes from the Flemish Department of Agriculture and Fisheries' agriculture figures page. View all VBT figures for week 37 for fruit and vegetables here.