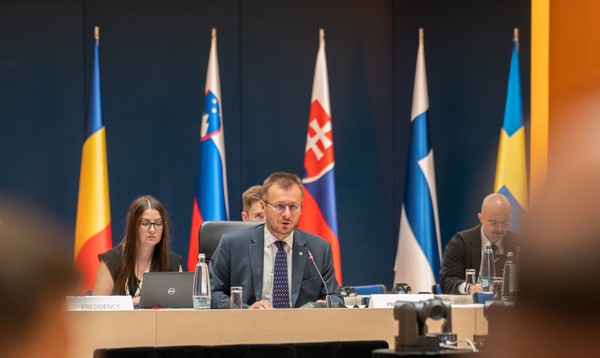 Russia's invasion of Ukraine, the lingering effects of the pandemic, and advancing climate change are having a major impact on global food security and world food prices. Agriculture ministers mainly discussed how to ensure sufficient food production and distribution to the most vulnerable countries while ensuring sustainability. One of the main solutions is to use innovation, research, and modern technologies, including precision farming, to further reduce pesticide and fertilizer consumption while maintaining the necessary productivity.

"Although there is enough food in the European Union, the pandemic and the Russian invasion of Ukraine have deepened the food crisis in the world. We have a major challenge in the Union to sustainably increase agricultural production, reduce food waste and ensure that people around the world have access to quality food. It may be time to rethink some traditional approaches to food production in favor of new modern techniques," said Agriculture Minister Zdeněk Nekula.

Science and innovation
Science, innovation, and modern plant breeding methods in agriculture were among the main topics of the meeting. It included contributions by Czech experts Professor Miroslav Trnka and Roman Hobza, PhD. Both said that new trends can help the EU in reducing the use of pesticides and fertilizers, in water management, or in breeding new varieties that are more resistant to extreme weather fluctuations and new plant pests and diseases. The Ministers agreed that the EU must react as quickly as possible to the development of modern trends and not hinder innovation. It is, therefore, important to change the outdated legislative framework by which the EU regulates the use of modern plant breeding methods. This framework not only restricts European farmers but also leads to an outflow of top experts to countries outside the European Union, so the damage is extraordinary.

"Even though the war in Ukraine is adversely affecting food production, commodity markets, energy prices, and thus all of us, we must not, as the European Union, resign ourselves to taking care of the landscape. We urgently need drought-, frost-, disease- and pest-resistant crops that require fewer pesticides and artificial fertilizers. That is why I am pleased that the Commissioner has clearly stated the European Commission's readiness to bring forward proposals for plant breeding legislation in the short term that will help to resolve the current problems," said Minister Nekula.

Situation in Ukraine, commodity exports
In the context of food security and food distribution, Mykola Solskyi, Minister of Agriculture of Ukraine, summarised the current challenges Ukraine is facing in this area. He also stressed the importance of the solidarity lanes facilitated by the EU and asked for their further extension. Due to the occupation of several Ukrainian ports by Russian troops, grain from Ukraine has to come also through other routes.

"According to the Food and Agriculture Organisation of the United Nations, nearly 40% of Africa's total wheat imports come from Russia and Ukraine. The World Food Programme, which feeds some 125 million people, buys 50% of its grain from Ukraine. The solidarity corridors do make sense, and we will address the possibilities of expanding and strengthening them as a separate topic at the Council in Brussels on 26 September," said Minister Nekula.

EU measures, context
To ensure food security in the context of the war in Ukraine, the EU has drawn up an action plan in record time, the Solidarity Lanes, to facilitate the export of Ukrainian commodities by land and inland waterways. Furthermore, the abolition of customs duties on imports of Ukrainian products into the EU is helping in this situation so that goods can travel more easily to countries in Africa, for example. In addition to the emergency aid to the most vulnerable sectors, the use of as much agricultural land as possible for food production and the exemption from crop rotation for next year should also help European farmers. The EU is also providing financial support to the countries most at risk at this time.

The meeting of the Ministers of Agriculture concluded a three-day program in the Czech Republic. In addition to Prague, they visited several farms to learn about agricultural production in the Czech Republic. The informal ministerial meeting is organized by each Presidency in its country and is a discussion on a selected topic that serves as a basis for further decision-making.