"If this continues, there will soon be increasingly fewer Dutch vegetables"

That is what Jan Janssen of Kwekerij Janssen says in this Glastuinbouw Nederland article.

"Being a grower is the best job in the world," writes Jan. "That's why I started my own cultivation company five years ago. I grow cucumbers in a 2.7-hectare greenhouse. The first few years went well. But last year, energy prices skyrocketed. I already pay about ten times as much for energy as a year ago. It's become too expensive to heat the greenhouse to grow cucumbers." 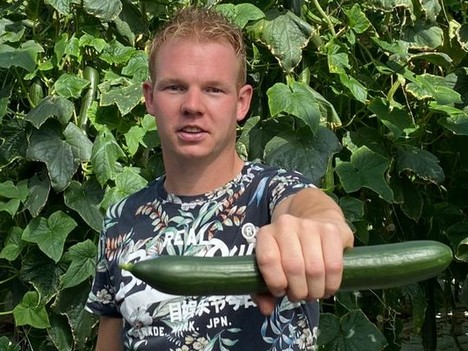 "I usually start cultivation in January. But last year, I didn't begin planting until May. Initially, the plan was to start in early March. I'd ordered the plants, but they went straight into the bin. Gas prices were going through the roof at the time. A few weeks later, when those prices dropped slightly, we sowed and began protracted cultivation in mid-May. I've also had only one growth round; in previous years, I'd had three. I only cultivated during the hottest time of this year," Jan explains.

"What does the coming year hold? I can only decide that shortly beforehand. Much depends on how high the gas price is. If it stays this high, I'll only do one round of cultivation again, starting in May. Otherwise, it's truly unaffordable. In that case, my two employees can, fortunately, work at my father's company. He grows bell peppers and will probably start early in the year."

"Other growers also cultivated fewer cucumbers this year. That makes it hard for our buyers, too; they have less Dutch produce. If prices stay this high," Jan adds, "then that problem will snowball and become noticeable in supermarkets. It could mean that, in the future, the Netherlands will have to import more and more vegetables from other countries."

"That would be a crying shame. Dutch vegetables are the best, cleanest, and most attractive in the world. Nowhere else are products as well controlled and as sustainably grown. And importing always works out to be more expensive. So I hope many people sign the petition. Because the Dutch greenhouse industry is suffering greatly from the high gas prices," concludes Jan.

The grower calls on people to support greenhouse horticulture and sign the petition.