It’s not only the Netherlands that has strict rules on light pollution caused by greenhouse horticulture. Growers in Canada – where the distance between greenhouses and people is decreasing and regulation of light emission has been introduced – are also required to reduce the nuisance due to grow lights. JEM Farms is one of these growers, located in Kingsville, Ontario. Having to keep the screens closed was mainly creating problems in the winter months, with an accumulation of temperature and moisture. The solution came from some 6,000 kilometers away: installing the Airmix of Van der Ende Groep. 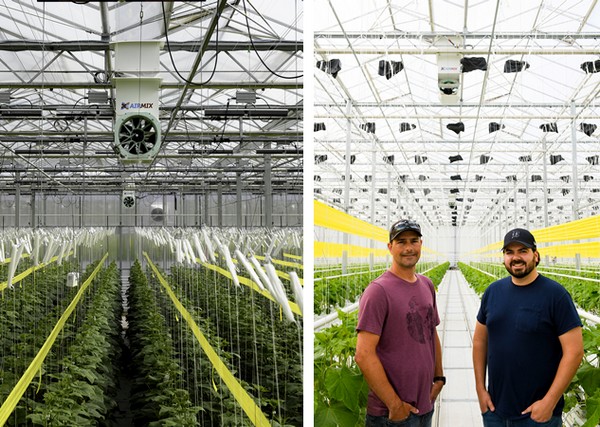 JEM Farms is a Canadian vegetable grower with an area of nearly 20 hectares (48 acres). The company is one of many growers for Red Sun Marketing. The greenhouses of JEM Farms are located in the horticultural region of Ontario, a province in the center of Canada that is 27 times larger than the Netherlands but has a population of ‘only’ 14.2 million.

The company grows several crops, including vine tomatoes, beefsteak tomatoes, organic grape tomatoes, cucumbers, and mini-cucumbers. JEM Farms is a pioneer in the use of innovative techniques. Recognizing the added value of data, the company is investing in the construction of HORTECA, a 2-acre facility for demonstration and research & development in the area of greenhouse horticulture. 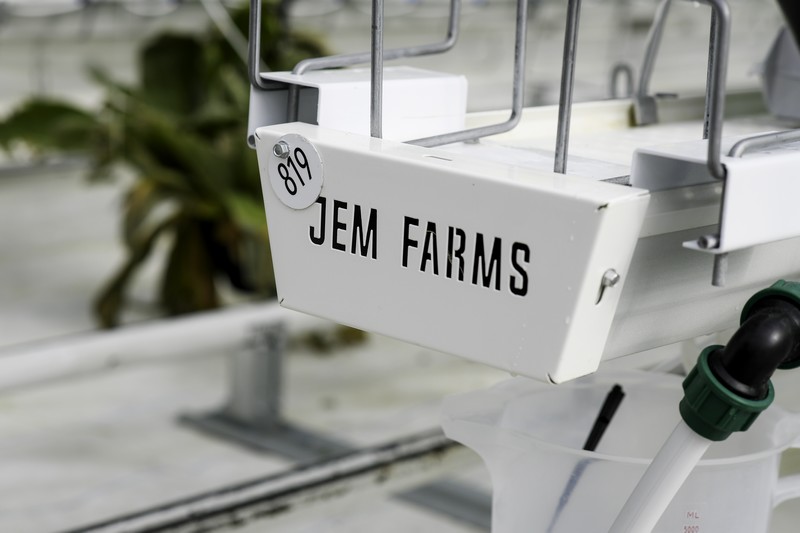 Dutch horticultural technology
JEM Farms has frequently obtained horticultural technology from the Netherlands: greenhouses from Havecon, lighting from Agrolux, software from Hoogendoorn, and Let’s Grow. And also, since 2020, Airmix systems from Van der Ende Groep. At the moment, they’re used in the cucumber and mini-cucumber greenhouses, but from February 2022, they will also be used in the grape tomato greenhouse, says head grower Blake Fischer. ‘When a crop is actively growing, you get more moisture in the air. In the past, we opened the windows to introduce cool, dry air from outside. It meant we could eliminate this problem and create the right humidity level and temperature, but not when the lights are switched on. The screens then have to stay closed to prevent light nuisance.’

Cold downdraughts in the crop caused by gaps
This is a problem that’s also familiar to his Dutch colleagues. In the Netherlands too, there’s no longer always the option of ‘just opening a small gap’ to allow moisture and heat to escape. An undesirable side effect is cold downdraughts in the crop. Maintaining an optimum greenhouse climate in the center of Canada is already difficult enough. The horticultural area of Ontario has a continental climate: the summers are hot, and the winters are cold. And just like in western Europe, Blake Fischer can also see that the climate is becoming more extreme: ‘Last summer, we had a couple of heatwaves.’ 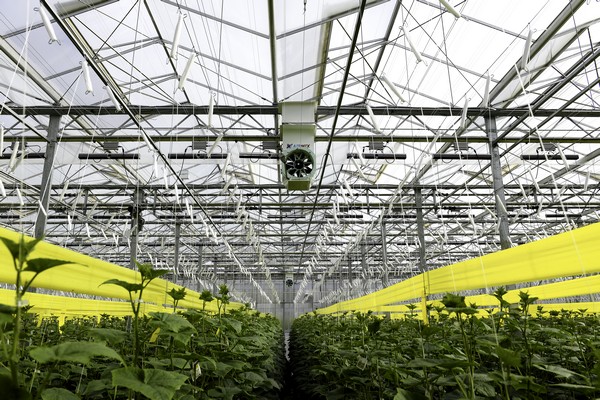 Mitigating the heat produced by lighting
For a long time, opening a gap in the screen has been one of the two possible solutions used at JEM Farms to reduce heat and moisture. The other ‘solution’ was not ideal either, from the perspective of the greenhouse climate: using the existing horizontal fans to circulate the air underneath the screen. A lighting system consisting of HPS 220 mmol lights created too much heat in the greenhouse, so an alternative for mitigating the heat production was very welcome.

Complying with the rules
‘With uncertainty about the rules for light reduction, we knew something had to be done to prevent light nuisance,’ says co-owner Jamie Mastronardi. ‘It was only when we discovered the Airmix system that we realized it gave us three advantages at once in the greenhouse: precise regulation of temperature and relative humidity and prevention of light emission. With this system, we comply with the local rules on light emission, and at the same time, we’re also able to control the climate.’ The Airmix makes it possible to ventilate and dehumidify – with closed screens – and thus achieve an optimum greenhouse climate. It has modulating valves to draw the right mix of cold and warm air into the greenhouse and therefore eliminates the need to open a gap in the screen to allow moisture and/or heat to escape. 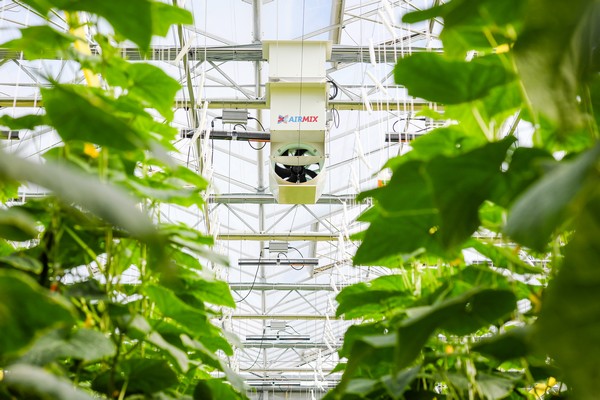 JEM Farms now has a total of 333 Airmix model T units. Jamie Mastronardi found that it wasn’t a problem to install the system in an existing greenhouse. ‘In fact, it was very easy.’

Energy savings
In addition to the three advantages mentioned above, he found there was another big advantage: energy savings. Because the screen can stay closed, the heat is retained, and there’s less need to use the boiler. This makes a considerable difference in gas consumption. And another bonus is that using the Airmix makes it possible to create a more uniform climate. There is better distribution of heat, thanks to horizontal and vertical air circulation. The Airmix, therefore, serves as a combined ventilation and circulation system.

Online fine-tuning
An important factor for successful use of the Airmix is correct calibration. Dutch customers can receive on-site instruction from Van der Ende Groep, and they also have the opportunity to attend a masterclass. All the ins and outs of the system are covered in just one session. However, on-site instruction at a distance of 6,000 kilometers is quite a different story. The relevant staff at JEM Farms were therefore instructed on operating and fine-tuning the controls via online sessions. 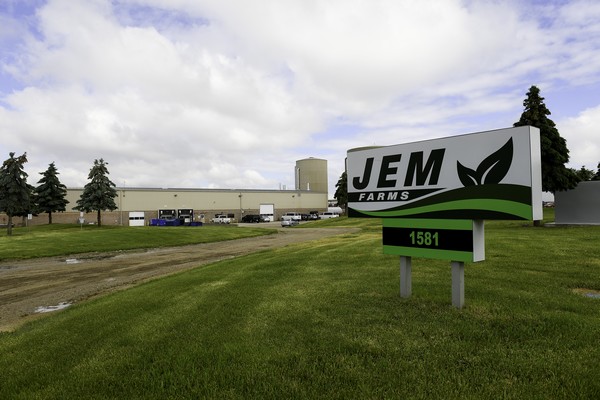 To everyone’s great satisfaction, say Jamie and Blake: ‘Those sessions were fantastic! They gave us much more insight. This was one reason we found it so easy to set the controls. The measurements in the greenhouse make sure that the Airmix is properly controlled by the climate computer, and the safety sensors make sure that we never introduce too much cold air. As long as outdoor air comes into the space between the screen and the roof, we have cooling capacity available and consequently also dry air in the greenhouse.’ 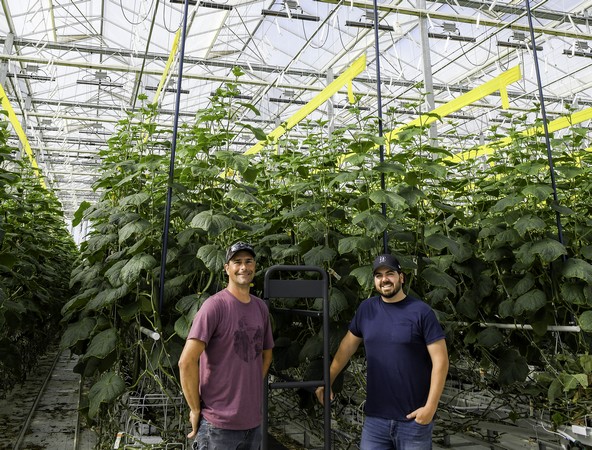