Indian greenhouse farming - which regions to focus on?

In 2005, the National Horticulture Mission (NHM), currently known as the Mission for Integrated Development of Horticulture (MIDH), was launched for the broader development of the horticulture sector in India. The journey of protected cultivation (greenhouses) in India at a commercial level can be traced back to the same year, as one of the important stimulators for its development was the subsidies offered by NHM.

Five years later, in 2012, the Agriculture Ministries of India and the Netherlands signed the Indo-Dutch Joint Action Plan under which Indo – Dutch Centers of Excellence are set up in different regions of India to demonstrate Dutch greenhouse technologies and knowledge. These Centers provide a platform for companies, knowledge institutes, and government agencies of both countries to share knowledge and experience with farmers about the potential and need for protected farming in India. 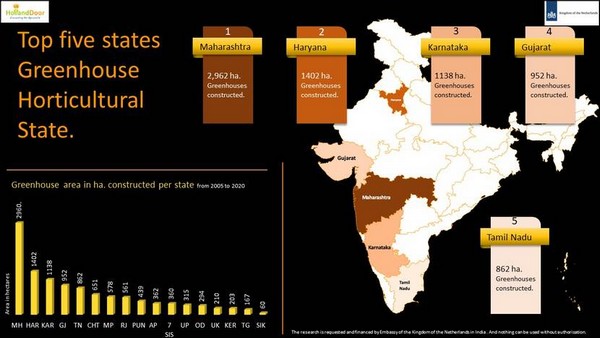 In this rapidly changing landscape, a need was felt to distinguish macro trends in the development of protected farming in India. Therefore last year, the Agriculture Department of the Embassy of the Kingdom of the Netherlands in India initiated a survey to find the regions in India that are seeing the growth of protected cultivation, the greenhouse types (low/medium/high-tech), crops cultivated in the greenhouses and the market linkages. The survey was conducted by HollandDoor, a Dutch organization closely linked with training Indian organizations and growers over the last several years on crop management in greenhouses, developing market linkages, and organizing exposure visits to the Netherlands.

The team that worked on the survey reached out to different stakeholders in India. This sector survey has some interesting findings for companies and institutes in both countries to work together and plan their ventures. Government agencies can use the survey to develop and implement programs and policies that can facilitate further expansion of protected cultivation in India.