Crisis update: 'There is enough supply to bring gas prices down'

The TTF gas price dropped below €200/MWh (briefly) on Thursday, the 8th of September. In the end, the price still closed above that limit. It does not take away from the fact that short-term prices dropped last week. However, long-term prices are still rising. In this crisis update, more on energy price developments and what is already known about European decisions on whether or not to intervene in the energy market.

The gas price for 'winter 2022' up to and including 8 September on the Title Transfer Facility. For the remaining months of 2022, the gas price was between €210-215/MWh by 11 am Friday morning. View the current figures here.

As usual, AgroEnergy looks back at energy price developments at the end of the week. The specialists speak, as they did earlier last year, of 'a rollercoaster'. Once again, price movements were extreme.

Gas supplies are getting better and better. (The Hague update of 9 September on this can be viewed here). In France, the UK, and Spain, the effect is already visible in daily prices. Specialists point out that prices are quoted at around 100 ct/m3, while in north-western and eastern Europe, the price is around 200 ct/m3. 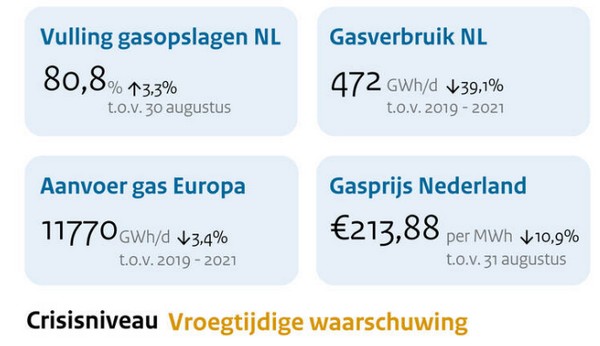 AgroEnergy notes that day gas prices and gas prices for next winter are falling, partly from the realization that the absence of a bit of Russian gas supply does not make that much difference. For the longer term, prices are still rising.

Interestingly, according to the specialists, OTC electricity prices show a "somewhat different picture" than gas prices. "The base price for October has remained level last week, while, on the contrary, forward prices 2023 and beyond have fallen considerably. This may be due to the fact that OTC electricity prices always lag somewhat behind gas prices. But the spark spread seems to have been falling somewhat all week. Part of the cause is the decreased price for CO2 emission rights."

For the coming week, AgroEnergy expects price pressure on short-term electricity prices due to rain and more wind. Daily gas prices may also continue to fall as a result.

From a supply perspective, gas has room for price decline, it concludes. "When gas supplies in Europe are full, a new equilibrium for international LNG prices will be sought. It seems logical that this price level will be lower, but this also depends heavily on Asian demand. This has risen recently. EU measures could also have a substantial impact." Read the full analysis here, which also covers European plans to intervene in the energy market.

More should become clear about that intervention over the course of Friday. Nu.nl points to European plans as a possible reason for the fall in gas prices. The Leeuwarder Courant further points to a fleet full of LNG heading this way.

BNR writes that Prime Minister Rutte seems to be moving towards setting an energy price cap after all. Earlier, the Netherlands was not necessarily in favor of it but is now sympathetic to the plans. In the video message, Royal FloraHolland CEO Steven van Schilfgaarde calls for it, as does the entire greenhouse horticulture lobby. Greenhouse entrepreneurs need certainty, and a maximum energy price can help.

Despite focusing mainly on their own affairs, people are still looking beyond their national borders. In doing so, you regularly hear how it is possible that 'us' here in Europe have such high energy prices, while elsewhere, prices are much lower. Are we perhaps trying to be too well-behaved and sustainable and moving away from fossil fuels too quickly, with adverse consequences now?

Minister Jetten seems to disagree. BNR points out that he has pointed (once again) to more energy savings from Europe. He also continues to fight for progress in the energy transition. In that message, he finds the glasshouse horticulture, where they point out the importance of the sector for that transition. Only the glasshouse horticulture will soon have to be able to contribute. Real solutions from The Hague to accommodate growers in that regard are yet to come out of Jetten's mouth.

The new British Prime Minister Truss is putting the energy transition on the back burner, BNR writes on the basis of reports from Reuters news agency. The UK government is expected to announce dozens of new exploration licenses for oil and gas extraction in the North Sea.

The greenhouse horticulture Energy Crisis Team met again on Wednesday, 7 September, to analyze the situation in the sector and work on possible solutions. Because of the critical situation for many entrepreneurs, the crisis team has been expanded, including representation from VNO-NCW. Read more at Glastuinbouw Nederland here.

On LinkedIn, a critical newspaper piece headlined "In Brussels, they wonder if the Netherlands knows it is serious" is highlighted. Read the piece here.

NOS writes about "the biggest interest rate hike ever by the ECB." A 0.75 percentage point increase in interest rates should help reduce inflation.