Over the past couple of years, the Nigerian government has been committed to growing the country's agricultural sector as a means of diversifying the economy and creating employment. A lot of young people then jumped into this new adventure, and the country has seen an increase in the number of 1st generation farmers. Muzzammil Abdullah from Emperor Integrated Farm is one of them. Emperor Integrated Farm is a Nigerian farm located in the North Central State of Kogi. "We have different kinds of productions here," he says. "We have livestock, like cattle, sheep, goats, and ostrich. We also grow open-field ginger, maize, rice, and cassava. We also have two greenhouses covering 1 hectare and a 20 ton/hr. fertilizer blending plant."

Starting anew during the pandemic
The company started its first greenhouse production cycle when the pandemic started, and Muzzammil doesn't hide the fact that it was a kind of a nightmare. "essential services were allowed to operate during that time, it took some time figuring out what could or couldn't be done. Luckily, we eventually sorted that out." But being a 1st generation grower, there was still a learning curve that Emperor Farm had to get through. 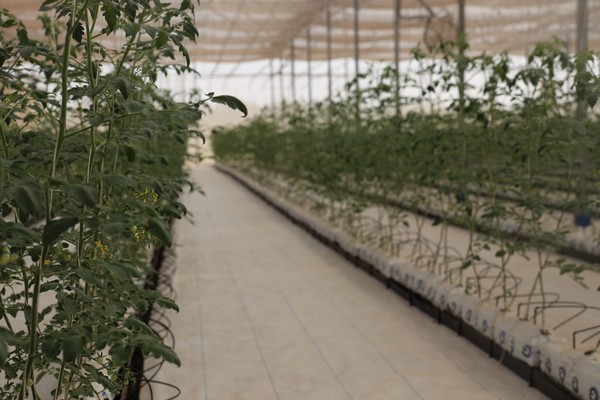 "Hydroponics is rather new here in Nigeria," he says. "As good as our team was, we weren't familiar with the new fully automated systems. We did have some training, but this was the classic case of 'easier said than done.'" As if that wasn't enough, Emperor Farm found an additional challenge when it came to inputs. "Most of the required inputs such as seeds, soluble fertilizers, coco peat are mostly imported and are not readily available in the local market. The hurdles started from the get-go. We had to find suppliers. It took us 6 months just to find a quality fertilizer supplier. But then, we had to find someone for the seeds."

It's not the end of the story because when all of that was finally set up, the energy and fertilizers price increases happened. "That was the last straw," Muzzammil chuckles. "We were not getting the type of fertilizer we wanted, which was causing issues to our drip irrigation systems, clogging the nozzles, and seriously affecting our production. To solve these problems and maintain our standard of production, we drove our cost of production quite high. The issue wasn't only related to the cost of fertilizers but also the higher diesel prices. "We are 200-300 km from Abuja, which is the target market for us, as we handled transportation ourselves, this also increased our costs."

Adapting to the challenges
So, Emperor Farm had to adapt their strategy to achieve profitability while staying competitive and maintaining its standards of production. "So we switched from hydroponics to grow bags," he explains. "To further manage the costs, we had to move from soluble fertilizers to granular fertilizer which is available locally. All of this has allowed us to look at the mid-range market, which is rather big in this area, and it's closer to us than the high-end one. This has reduced our transportation costs as well."

The change in the strategy has not only benefitted the operating costs but also the work in the greenhouse. "Our team is more familiar with grow bags – the team has worked with them for a long time. The management of the plant became much easier for us. Yet, this is our first cycle with grow bags, so we have to see how the yield will be."

The right crop for the right market
Up until now, Emperor Integrated Farm has been growing tomatoes, bell peppers, habaneros cucumbers, and even sweet melons, "and we have seen varying success," he remarks. "Sweet melons and cucumbers performed well, tomatoes and especially cherry tomatoes performed really well. Unfortunately, there isn't a large market for cherry tomatoes, so we had to focus more on beef tomatoes, historically our best-selling product.

Right now, we are growing beef tomatoes, and bell peppers." Bell peppers are especially sought after, both green and colored. "They are of high value here," he points out. "Big supermarket chains import them, so it's huge for the people here to have high quality, locally, greenhouse-grown bell peppers."

Emperor Farm has been going through all of this because this is pretty much an operational proof of concept, so to say. "First, we are studying the best way to grow high-quality yields profitably. That's why we have been trying different things, and then we adapt as hiccups occur," he says. The plan is indeed to go large-scale once major pain points are resolved. "We believe that with a good mix of cost management and efficiency, we can grow the highest quality, and ideally even export. Generally speaking, horticulture is here in Nigeria to stay and grow."

That kind of goes without saying, considering the surge of 1st generation farmers. "I studied accounting and finance, and now I find myself on a farm trying to figure out the best fertilizer," Muzzammil chuckles. "A lot of people are coming into the industry from a non-agronomic background. This means that they are coming with a different mindset, which is always good – that's when innovation comes in. A person with a mechanical engineering background would look at a greenhouse differently than a grower."